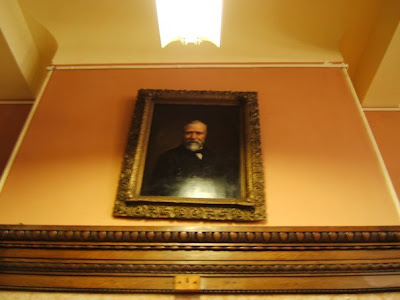 Andrew Carnegie at the Braddock Carnegie Library, dedicated in 1889.

Following up on my July op-ed about public library advocacy through Library Tourism, I will be conducting a library tour in Pittsburgh a week from today. In fact, as part of the Pittsburgh Small Press Festival's month of events, I have been asked to conduct two tours. On Sunday, September 12th, I will be taking a trolley-full of people to tour a few major libraries in Pittsburgh, and on Sunday, September 19th, I will conduct a tour of six of Pittsburgh’s indie bookstores.
Pittsburgh has such an embarrassment of riches when it comes to historic libraries and indie bookstores, that we won’t get to all of them, but I’ll talk about the ones we don’t go to. Both tours will be from 1:00-4:30pm, both cost $10, and both will come with a “swag bag” of goodies, including one free Autumn House Press book for each tour participant, as well as a brochure-map of either Pittsburgh's historic libraries or the city's indie bookstores (respectively). You must sign up before the tours. Tickets and details are HERE for the Library Tour and HERE for the Bookstore Tour.
Posted by Karen Lillis at 5:43 PM

Thanks Karen, it was a great tour!