Meet the Author at the Bus Station: Or, How to Book an Affordable Zine Tour in Tight Times 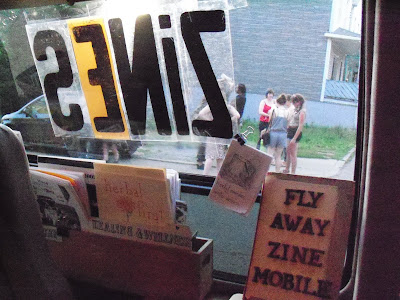 Zines on wheels: The Fly Away Zine Mobile toured through Pittsburgh in July 2011.
The Wall Street Journal recently reported on the rise of author signings in airport bookstores ("Meet the Author at the Airport"). I loved this image of an author touring without even leaving the transportation hubs, and having a roster of signings dedicated to travelers.

But airport bookstores are unlikely to cater to small press readings any time soon. Likewise, many small and micro press writers would be financially deterred from touring by airplane. For writers from our side of the tracks we have discount buslines, those new web-booked, low-overhead, curbside, wifi-equipped, post-Chinatown bus lines like Megabus and Bolt Bus that cost riders as little as $1 per trip. A few weeks ago, I interviewed zinester Ocean about her August 2011 zine tour via Megabus, the "High on Unemployment Tour."

The tour name refers to both her current unemployment checks (her government job shuts down in the summer) and her current zine series, "High on Burning Photographs." Ocean's storytelling is intense, compelling, and intensely personal, as she offers hilarious, poignant, inspiring, or heart-wrenching dispatches from one young woman's "aging riot grrrl" life. Ocean's life as written has been full of adventure, full of tight friendships with vibrant and fearless friends, and full of astute reflections and complex observations from quieter seasons. Her scope is deep and wide, reporting stories from her kitchen table at 3:00am, from her local laundromat, from penpal conversations with prisoners, or from the landscape of young, queer America. Lucky for her readers, she's been recording her stories in xeroxed zines since 1996, when she was a young teenager.

Ocean originally hails from New York, but now lives and writes in Pittsburgh. Conveniently for her, Pittsburgh was recently made a Megabus hub connecting numerous points on the East Coast and the Midwest. On tour, she'll be concentrating on the cities of the Midwest, and she's excited to get to know that part of the country, with which she's not very familiar. Not all dates are set in stone yet, but she has plans to read in Cleveland, Detroit, Chicago (another Megabus hub), Madison, Milwaukee, and Minneapolis. Columbus is a maybe and she'll do a last reading back in New York. 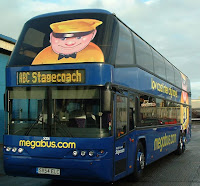 In Cleveland, Ocean will read (August 6th) at the longstanding literary bookstore, Mac's Backs, which has been open in Ohio since 1978, and in its current Cleveland Heights location since 1982. In Chicago, where she'll join up with a few zinester friends, Ocean plans to read at the quintessential DIY bookstore, Quimby's. Her Minneapolis venue is zine-friendly Boneshaker Books, and in Detroit she's excited to read at the anarchy space, the Trumbullplex, in conjunction with their new zine library. In Milwaukee she's hooking up with QZAP (Queer Zine Archive Project), in Madison she hopes to hit the Rainbow Bookstore Cooperative, and she'll wrap up with a reading at Bluestockings Bookstore in downtown Manhattan around late August or early September. For this last reading Ocean will pair up with the For the Birds feminist collective.

The young writer seemed excited about getting on the road to meet and greet the zine community. She talked about missing this aspect of the zine experience from her early days. "When I first got into zines, most people who read my zines would write me a letter back. That was normal--I guess before the internet we [zine writers] were all stranded in random places, desperate to find people we could relate to. Now I think I hear from about 10% of my readers. Even the zine ordering process is not as personal as it once was. Now we have these great distros, but back in the day, every zine had a zine review section. They gave the address and said 'send $1.'" These days Ocean usually skips the distros and sticks with mailing and handing out her zines to friends or longtime followers.
To get the latest issue of "High on Burning Photographs," send $1 or two stamps to:

Ocean
PO Box 40144
Pittsburgh, PA 15201
Stay tuned for a full list of tour dates and venues for Ocean's High on Unemployment Tour.
Posted by Karen Lillis at 11:09 AM