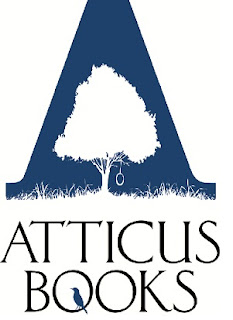 Atticus Books is a new independent press based in the Maryland outskirts of Washington DC, with a catalog focused on innovative literary fiction by emerging writers. Atticus editor Dan Cafaro has generously offered to donate three Atticus titles to reviewers for another book giveaway. Dan (a native of New Jersey) is a poet and former journalist who once owned a bookshop in Eastern Pennsylvania. He named Atticus Books in homage to Cicero’s publisher, although he gets many inquiries about the relationship to an Atticus bookstore that once thrived in DC and Alexandria, Va. (No relation.) I’ve been enjoying the Atticus website, which has a large amount of literary content, especially considering it doesn’t call itself a literary journal. The site runs short fiction as well as poetry, a wonderful column of profiles in indie bookselling, book reviews, interviews, and a blog of musings on literature and the indie publishing world. Check out the site and its offerings here:
http://atticusbooksonline.com/

To win a book to review (see selections below), tell me:
1.) which book you want to review
2.) a bit about your relationship to the small press
3.) what’s your favorite small press book
I will publish your review of the book (succinct: 100-250 words) on this blog and would request the review to be sent to me before the end of February 2011.
I’ll take comments on Blogger or Facebook, messages on Facebook, or emails to eyescorpion@gmail.com, and I’ll choose three winners. Previous winners are ineligible. 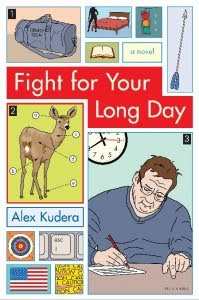 Cyrus Duffleman, the decidedly non-PC antihero of Fight for Your Long Day, channels the rage of the academic underclass, with a story that "unflinchingly exposes key paradoxes that lie disturbingly at the core of American academia." Created in the cockeyed spirit of A Confederacy of Dunces, Adjunct Duffleman, aka Duffy, undergoes an unraveling that conjures up visions of a subway-scholar Ignatius J. Reilly schlepping for humanity in One Day in the Life of Ivan Denisovich.
http://atticusbooksonline.com/category/press-releases/fight-for-your-long-day-press-releases/

This finely crafted narrative explores the motivations and mettle of a close-knit group of 21st century knowledge workers and examines the interpretation of history, the translation of language, and most of all, the dynamics of modern day relationships. It sheds a shadowy light on the crux of decision-making and investigates the conflicting forces that shape our daily lives. It captures in fine fashion both the choices we make and the accidents that happen.
http://atticusbooksonline.com/category/press-releases/daring-to-eat-a-peach-press-releases/

Charles Lime eats, breathes, and sleeps the romantic idea of leaving Small Town USA, wandering the globe, and “having grand adventures laced with the danger and lustiness of exotic climes.” In reality, Charles, a 20-something college-graduate, walks the drab city streets of Western Pennsylvania, dazed and bemused—a dreamy misfit bewitched by a girl and bewildered by a string of misfortunes. If someone has the right to fall off the deep end, it’s Charles who reads incessantly and retreats further and further into his imagination where he escapes his predicament by creating a parallel life filled with overseas travel, adventure and Serbian pop music.
http://atticusbooksonline.com/category/press-releases/the-absent-traveler-press-releases/
Posted by Karen Lillis at 6:33 AM

Update: We have a reviewer for "Daring To Eat a Peach." The other two titles are still available!

We now have a reviewer for "The Absent Traveler: A Novella & Other Stories" by Randall DeVallance. One title left~~