Small Press Recommendations: On the Third Day of Kwanzaa 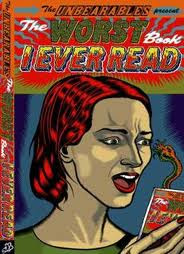 Today’s recommendations come from two great small press booksellers. Ron Kolm has been a bookseller at various indies in Manhattan for 35 years, including some of the greats: St. Mark’s Bookshop, Strand, East Side Books, Coliseum, Posman Books. Known as the “Fuller Brush Man of the Lower East Side” because he is often carrying a bag of small press books to show or give you, Ron is also a prolific writer of prose and poetry and a founding member of the group of literary renegades, The Unbearables. He’s edited several anthologies of writing by the Unbearables, including one of the best small press books I read in 2010, called The Worst Book I Ever Read. I love that the writers included are mainly poets, novelists, and experimentalists, but happen to be talented and engaging nonfiction storytellers in their spare time. Yes, a bibliophile’s title of books writers hate: This is one of the best books about books (and reading) I’ve read in a while--and one of the best books of true stories, too.

Bill Boichel runs Copacetic Comics, one of my favorite bookstores in Pittsburgh or elsewhere. He’s been selling comics for over 30 years, and promoting Pittsburgh artists/educating Pittsburgh readers for almost as long through his always-eclectic wares and gatherings, first through multi-media, comics-oriented events like Transfer (and an accompanying comics anthology, Transformer); next through his hangout-store in east Pittsburgh, BEM; and most recently through the first annual PIX: Pittsburgh’s Indy Comics Expo. Copacetic is his second store (opened in 2000) and features much more than traditional comics: Marvel and DC favorites sit beside indie comics, art and photography monographs share the store with fiction and poetry, titles on cinema studies sit beside a highly-curated selection of CDs and DVDs. Consequently, Bill has the chance to introduce Superman fans to Julie Doucet, to lure in art students and fiction lovers and introduce them to graphic novels, or to be an unsuspecting neighborhood shopper’s first exposure to the existence of zines, the films of Hal Hartley, or the artists of Fantagraphics. Copacetic expanded in late 2009 to provide a gift shop for Pittsburgh's cartoon museum, Toonseum: There Bill features the history of comics on his shelves.

Ron and Bill have also contributed their small press expertise to library collections. Ron helps libraries build comprehensive small press archives, most notably at the Fales Special Collection at the New York University library. Bill helped build the graphic novel collection at the Carnegie Library of Pittsburgh by selecting the small press and other obscure titles to round out the superheroes.

I have to offer kudos to both Ron and Bill for their tireless evangelism on behalf of the small press!

Recommended by
Ron Kolm, writer and editor at Unbearables Books and Autonomedia
http://www.unbearables.com/blog/ 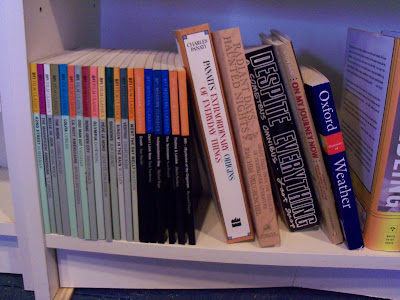 The BFI Film Classics Series sits near the Cometbus zine anthology at Copacetic Comics.
Posted by Karen Lillis at 9:33 AM