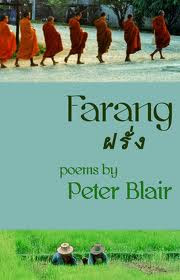 In Thai, farang means “outsider.” Specifically, a white outsider. The farang is the gringo of Southeast Asia, and there is no question, as one reads Peter Blair’s verse, that he is an outsider. But Blair is also deeply imbedded in Thailand, and as Farang progresses, we see not a mere outsider, but a man caught in a cultural tide-pool.

Among Westerners, Thailand enjoys a happy reputation – easy to fly to, traveler-friendly, full of exotic wonders. But when Blair began work as a Peace Corps volunteer, he found a different Thailand – a troubled country wracked by loathing and political turmoil. Blair dates a woman named Siripan, but her father “doesn’t like her/dating a farang.” He meets a “bar girl,” the infamous victim of Asian sex-slavery, who “says her father sold her, 10,000 baht,/to a Bangkok bar.”

One could expect such cultural dissonance in a country 7,500 miles from Blair’s native Pittsburgh. Blair seems savvy enough, but nothing could prepare him for the drowning of his friend, Ampon. This accidental death is a shocker, and there are many such moments in Farang – there is even a coup, while Blair is “up-country” – and they are all treated with an eerie Buddhist calm.

Blair adapts to Thailand, slowly and painfully, and by the time he returns to Pittsburgh, he sounds ghostly with new perspective: “In O’Rourke’s Bar and Grille, a mile/from where I grew up,/I’m a farang,” he declares in his penultimate poem, “Back in Pittsburgh for my Father’s Funeral.”

Farang has been described as a travel narrative, but the volume is something more – an intimate account of life on a cultural frontier. Blair is not only a white outsider, but a first-worlder living in a country ravaged by foreign powers. Like Steinbeck, Blair comes uncomfortably close to his subjects, and the proximity burns him. But this is what makes farang such a masterwork; if Blair can’t bring us all of Thailand, he can show us the tragic beauty of his scars.
http://www.autumnhouse.org/catalog/farang-by-peter-blair/

Reviewed by
Robert Isenberg, author of The Archipelago: A Balkan Passage (Autumn House Press, 2011)
http://www.autumnhouse.org/the-archipelago-a-balkan-passage/
Posted by Karen Lillis at 8:59 AM