Interview with a Pop-Up Bookseller 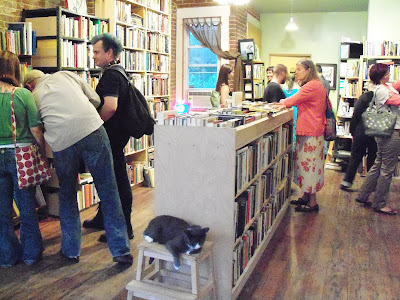 This morning I sat down at a Pittsburgh café with Jodi Morrison, the energetic woman who is spearheading the Fleeting Pages pop-up bookstore project, due to open in Pittsburgh--for one month--on April 30th.

When asked how she came to the idea of setting a small-press indie bookstore inside the space of a former chain bookstore, Morrison traces the following arc: She recalls fondly the abundance of independent bookstores that once existed in Pittsburgh's most educated neighborhood, Squirrel Hill. A Barnes & Noble which landed there in the late '90s wiped out smaller favorites like the Squirrel Hill Bookstore and Three Penny Books. But when the Barnes & Noble itself closed in late 2009, Morrison wanted to take it back for the independents. She claims, "I immediately thought, 'Let's fill that space up with something different.' " She couldn't get the thought of inhabiting the space and reversing the cycle out of her mind: "And I just assumed that everyone else was thinking the same thing!" A variety of circumstances prevented her from sealing the deal on that real estate at that time, but when she heard about Borders going bankrupt, her mental wheels started turning again. She called up former Soft Skull Press editor, Richard Nash (for whom she had once worked), and he loved the idea of Fleeting Pages. "To have Richard be so positive and excited about the idea was incredibly empowering."

It's been less than two weeks since the Fleeting Pages website went live, and the response from interested small press and self-publishers has already been enormous; the project has gotten national press, and Morrison's inbox is flooded. She cites such publishers as Future Tense, Ugly Duckling Presse, and Weave Magazine as early responders, with Nash's latest publishing ventures, Cursor and Red Lemonade, as official supporters. She's even gotten some potential interest from some of the big publishers, but they want to know some hard-line statistics before they leap: "I've been getting a lot of 'Why Pittsburgh?' from certain publishers. They say, 'Let us know if you plan to do this in New York, Portland, or Seattle.' They are skeptical that there's a market for it here." But as I recently reported in Pop City, Pittsburgh's emerging arts are booming, its cultural audience is enthusiastic, and its small press scene supports far more independent publishers and reading series than a city of its size would suggest. In the past two years, the city has started two annual small press fairs: SPF, featuring literary and poetry presses, and PIX, for small press comics.

Morrison says she was reared on Pittsburgh's tight-knit indie community, and it taught her what to look for when she left. Growing up in Pittsburgh in the 90s, Morrison says, "There were great things happening on a smaller scale in the indie arts in Pittsburgh—in music, zines, and books. I learned a lot from that community, like how to treat other people and how to respect the work. But I left [in 1996] because the support for indie culture wasn't being reflected in the city in a larger way at that time." She has since enjoyed such subcultures in Boston, Chicago, and Brooklyn, before returning to an evolving Pittsburgh area in 2008. 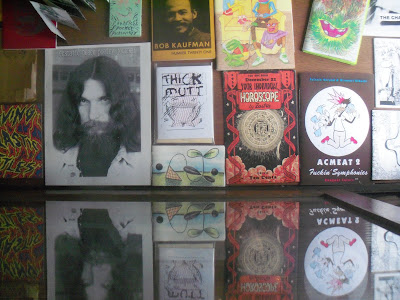 As for the small press books that will stock Fleeting Pages' shelves, Morrison is adamant about an open-door policy ("as long as it's not illegal"), and is impartial as to whether the items are coming from literary presses, Christian imprints, self-published historians, or precocious 14-year olds. She states, "The culture of the book is changing so much. You no longer have to have an agent and a contract to publish a book. I'm interested in exploring who is creating books now, and also in questioning who determines our access…. Borders and Barnes and Noble aren't interested in stocking a title that would sell only one copy per store. But to a small or self-publisher, selling 600 or 700 books would be a huge deal." On the other hand, as a book lover with a wide range of reading tastes, she has great sympathy for the publishers who will be hurt by the chain stores' downsizing.

Fleeting Pages plans to have an online store, in part to accommodate the large response from people who want to support the project but can't travel to Pittsburgh in May. The company Bibliopolis will assist in setting up the online component. Bibliopolis (based in Berkeley and now also in Pittsburgh) specializes in creating websites for used and rare bookstores, with clients such as Argosy Book Store in New York and Caliban Books in Pittsburgh. But Morrison does stress the important role that brick and mortar stores have played in her life. One favorite bookseller in late '90s Boston used to greet her when she walked in the door with, "Jodi, I've got some titles I think you'd like." If she expressed interest in learning more on a certain subject, he would research more books on that topic for the next time she came in. "There was a librarian aspect to what he did," Morrison says. She remembers the vibrant conversations and information exchanges she enjoyed with other customers at the store, too—whether finding out about neighborhood news or upcoming music events. 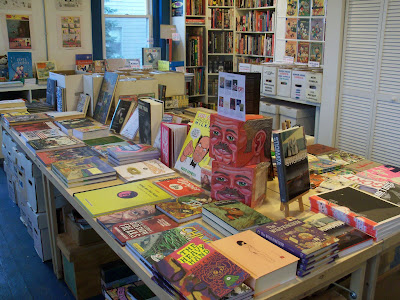 "Bookstores have been a valuable cultural space," Morrison states. To that end, Fleeting Pages will be used not only for bookselling, but in a variety of ways—depending in part on how the indie community responds. Morrison insists that she doesn't want to over-determine what should transpire, but seeks input and ideas from other interested parties. Some requests that have already come across her desk include a communal typewriter for customers to use, tables available for writers around the store, and a resource library for writers to browse. Fleeting Pages will host events such as literary readings and writing workshops, film showings (including the Soft Skull movie, "Horns and Halos"), and a book arts exhibition.

Though the admitted insomniac is working hard between now and April 30th, Morrison is happy for Fleeting Pages to be a project in progress, and will allow its uses to evolve throughout the month it is open. She's also quick to point out that even though her name is the main one associated with the bookstore project, "One hundred and forty-seven other individuals have also pitched in, so far. It's not just me." As just one example, Morrison will have help from friends both near and far in staffing the store.

Jodi Morrison knows that "some people will walk into [Fleeting Pages] and see it as a success, and some will see it as a failure, like, 'This or that could have been done better.' But I hope that both camps take what they see and go build on it. This is just a start."

Read more about submitting your books to Fleeting Pages:
http://www.fleetingpages.com/category/submit-work/