The Art of the Book Review: Lavinia Ludlow

Today's post resumes the Art of the Book Review interview series. Lavinia Ludlow is a prolific small press reviewer and talented fiction writer who made waves with her wry and original debut novel, alt.punk: In it, Ludlow gives us Hazel, an obsessive young neatnik with a weakness for punk boys who keep her busy with their messy lives. Lavinia reviews indie lit titles for publications like American Book Review, The Nervous Breakdown, Small Press Reviews, Smalldoggies Magazine, and Plumb Blog.

Karen the Small Press Librarian: What do you believe a book review should DO? What's its job?

Lavinia Ludlow: Highlight an author’s writing style and content, and help market the book’s major dramatic focus. Many titles release every day in the mainstream and indie market, and a review gives readers a short summary and critical glimpse into the bones of the book.

Karen: Do book reviews matter, and if so, to whom?

Lavinia: All stakeholders involved. Reviews are varying interpretations that can spark discussion points, controversy, and interest. They can also give authors and publishers constructive or blatant feedback.

Karen: It seems like you are doing a great service to small press authors by reviewing so many of their books. Do you view it this way?

Lavinia: I enjoy reading indie titles because I gain a sense of where the industry is heading. I’m also exposed to many different narrative voices, points of view, and content and writing styles I find impossible to find in the mainstream market. Reading indie books/manuscripts is not only enjoyable, but I feel as if I get to connect with writers near and far through their most intimate projects.

Lavinia: I definitely think there are great review sites out there that get a lot of foot traffic. Small Press Reviews by Marc Schuster is absolutely stellar. The Nervous Breakdown is another. Pank Mag. Smalldoggies Mag. Just to name a few. I feel it’s definitely harder for small press books to gain publicity merely because not every indie writer/press has the resources to market “big.” However, with enough research and networking, indie authors can definitely get their material reviewed in fair amounts.

Karen: In alt.punk, your protagonist, Hazel, is a very neurotic character: a hypochondriac and extreme germaphobe who hangs around with sloppy-drunk punk boys who live in their own messes. I thought she was a really funny, interesting, original character—an alternative to all the jadedness that is usually associated with rock-and-roll memoirs or punk voices. But Hazel is not necessarily someone who readers are going to be comfortable identifying with (assuming many readers feel pressure to do so). Did you find this issue came up in reviews of your book? Did you find that reviewers were critiquing the character as much as the writing?

Lavinia: Some reviewers did strike down Hazel’s extreme persona, but most characters in alt.punk fell on extreme sides of the spectrum whether liberal, conservative, hypercritical, or just plain bizzaro. I wrote and edited the manuscript when my life was at its most chaotic and unsettled. The intensity in my head matched what I put down on the page, and alt.punk is a reflection of me (at the time) at my most honest. I wholly understand how intense the content and voice narration may seem to some readers.

I did find reviewers analyzed the characters a tad more than my writing style, but this goes back to my intentional attempt at extreme personas. All in all, I accepted the feedback, understood where reviewers were coming from, and have applied the lessons to my forthcoming projects.

And so, full steam ahead.

Karen: Don't get me wrong, I'm not trying to make you defend Hazel, either why you wrote her in the first place, or why you thought she would work in your novel. Instead, I'm wondering: Are we as female novelists actually expected to write fully-functioning feminist heroines for protagonists because of the age in which we're living? And if we respond to our critics by trying to "do better next time," isn't that a potentially problematic tendency to try and be appealing as women all over again, to attempt to soothe the anxieties of others, in writing instead of in life?

Lavinia: I don't think we are, no. I believe if a male author wrote a similar POV with equal codependencies, phobias, and hangups, he would receive similar criticisms on content or story direction. My editor once told me that a writer should craft a scene/scenario and continue to move the plot forward so that the reader is "rooting" for the protagonist. We should want to see him/her succeed, against the odds.

Thanks to Lavinia for her participation in the series. Check out previous interviews about book reviews/reviewing with: 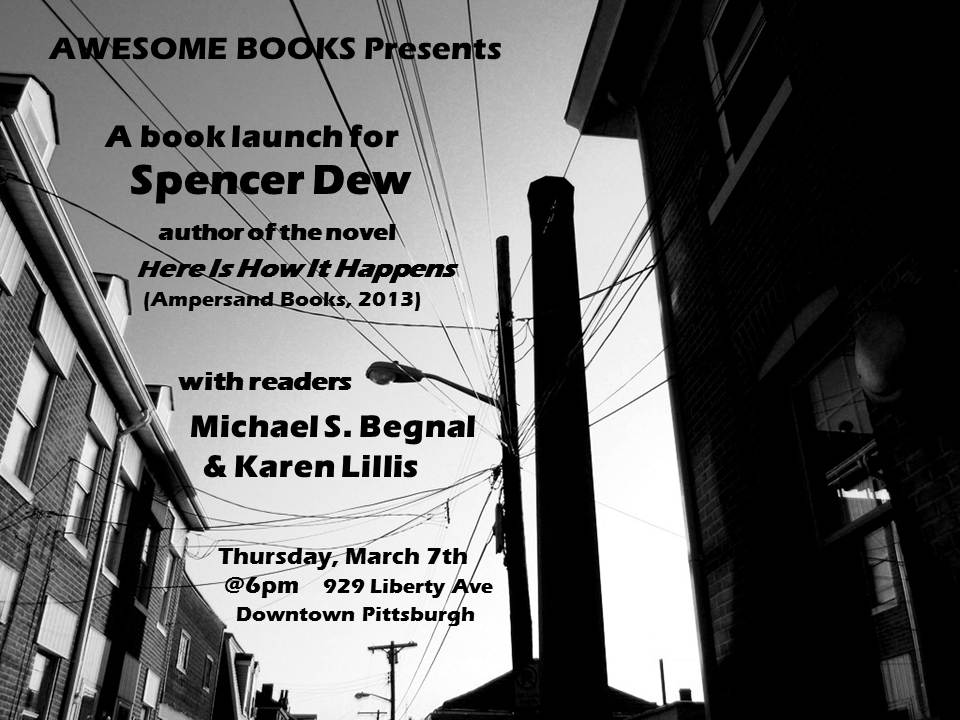 Congratulations to Spencer Dew and Ampersand Books for the release of Here Is How It Happens, Dew's debut novel. The book launch will take place in Pittsburgh tomorrow night at Awesome Books' downtown location. Awesome Books is the only literary bookstore in Pittsburgh's Cultural District and turned up as a "pop-up" store in December 2011. They've quickly gained a reputation for their savvy selection of new and used books (both classics and new indie lit titles), as well as their regular roster of book events that gather lively crowds of small press writers. Awesome's downtown presence has been a welcome surprise to tourists and Pittsburghers alike, and we hope it stays around for a long time.

I'm honored to be involved in the book launch reading for Dew's novel, along with poet Michael S. Begnal, a Salmon Poetry author and former editor of Galway literary magazine, The Burning Bush.

It was also an honor to be asked to write a blurb for the darkly comic Here Is How It Happens. Here's what I said:


"Spencer Dew writes like a quiet maniac who sees the violence under the façade of everyday things, and the beauty under the violence. With X-ray vision and fine-tuned prose, Dew discovers insights and absurdities in the Americana of box stores, elite colleges, poetry students, buffet restaurants, historic plaques, alternative radio, conspiracy theorists, installation artists, and lug-headed drug experimentalists. Here is How it Happens explores the place where the heartland meets the rust belt meets the precarious bubble of academia, and finds redemption in the purity of longing and the shit coffee of an Amish country diner.”

Read the first review of the novel at XenoFiles here:
http://ljmoore.wordpress.com/2013/03/02/here-is-how-it-happens-spencer-dew-ampersand-books-march-2013/

Previously on this blog:

The Art of the Book Review: Spencer Dew

Posted by Karen Lillis at 12:51 PM No comments: