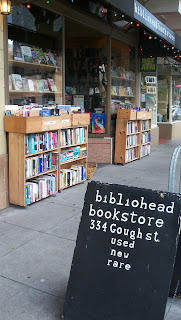 Today I discovered a great, compact indie bookstore in the Hayes Valley neighborhood of San Francisco, Bibliohead Bookstore. I was not in good shape for a bookstore visit, being too whacked out from the plane ride, but the bookstore found me and I couldn't resist. I popped in with less than all of my faculties intact, and the store still managed to charm me and entice me to leave with three books I didn't know I needed.

I decided recently that there should be a Beat Generation Concordance, or maybe a Beat Glossary or a Beat Thesaurus. I love the verbs (and slang vocabulary in general) of the Beat writers. Even though today's writers can't use too many of them because it's not today's language, I still find a value in listening to this subculture speak a parallel jargon--in hearing Kerouac and Ginsberg push so hard to trade mundane verbs for idioms, while never touching purple prose.

So, since I'm here in Beat Generation Ground Zero, I thought I'd ask. "Did anyone ever put together a Beat Concordance?" The owner was delighted with the idea and we looked in Reference Books on language, and in the Beat section, which was mostly rare books. She looked around online and found the existence of BEAT SPEAK: An Illustrated Beat Glossary circa 1956-1959, published by Water Row Books in 1996. I appreciated learning about both the book and the (Beat-centric) publisher. She told me I should look at City Lights Bookstore and also at The Beat Museum. Then she told me that if no one's put together the Beat Concordance, that probably means I should do it.

(I know about Straight from the Fridge, Dad, because it used to be on the reference shelf at St Mark's Bookshop, and it's probably time I bought a copy for myself. It's what I was thinking might turn up when I asked the bookstore owner for her Reference shelf. Instead I found a book that will probably end up being more useful to me, a book on slang from the 1990s.)

I was reading Kerouac's Subterraneans on the plane today (a great dime store copy I bought at Eljay's), and I was enjoying the novel for itself, but another part of my mind kept wanting a list of all his verbs, all his adjectives. Maybe that's the way to start chipping away at a concordance--one major Beat work at a time.

The Bibliohead Bookstore is open seven days a week and has been around for over eight years.