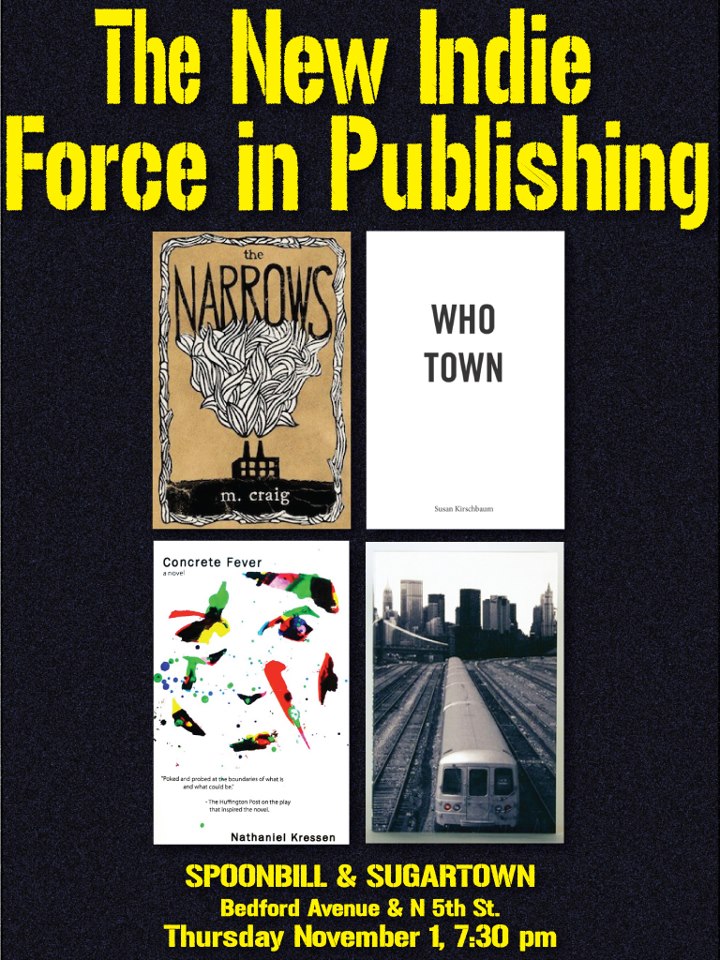 Don't miss this panel discussion on indie publishing to be held Thursday, November 1, 2012 at 7.30 PM at Spoonbill & Sugartown in Brooklyn.

To initiate an ongoing debate on the state of independent publishing, Spoonbill & Sugartown Booksellers is bringing together local indie authors who have chosen to forgoe traditional publishing and forge their own paths to authorship. Through consistantly selling out at indie bookstores around the nation and garnering accliam for their work, these wordsmiths are proving to be the vanguard of a new model for publishing. The night features m. craig (The Narrows), Susan Kirschbaum (Who Town), Nathaniel Kressen (Concrete Fever), and Rami Shamir (Train to Pokipse) -- who will talk about the struggles and joys of independent publishing. Specific issues of finance, book-production, editing, and promotion will also be addressed. The authors will share the various approaches they've taken in dealing with these issues, while being questioned by the evening's moderator and Spoonbill's book buyer, Jamie Johnston. The event will take place on Nov 01, 2012 at 7.30 PM at Spoonbill & Sugartown in Williamsburg.

Post script: There is a chance that Anonymous. author of The Oxygen Thief, will also participate in the panel.


UPDATE:
This event has been POSTPONED due to Hurricane Sandy. As of now, there is no new date. Stay tuned to Spoonbill & Sugartown's events page to find out about the new date.
Posted by Karen Lillis at 6:35 AM No comments: 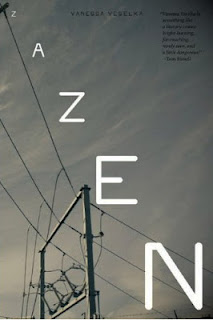 Vanessa Veselka is the author of Zazen--by far my favorite book of the year. I tend to read a ton in the summers because I don't have time to write then and this past summer I decided to read only novels by women. I loved Gone Girl--I thought it was fresh and the structure was great, I love an unreliable narrator, and I thought it offered some deeper messages about partnership. I've had times in my life when the most intimate thing in my relationship with my partner was the hatred between us. (Luckily that didn't last.) and Shelia Heti's How Should A Person Be was a good read, though I was surprised at the reaction to the sex scene, so many people wrote about that when I thought the novel was more about the small moments and decisions in a young woman's life. Anyways I read a lot and then Vanessa's book was recommended to me by the fabulous Lauren Cerand, and then I read it and I fucking loved it. I sent her a fan email the night I finished the novel with the subject line, "Holy Fuck." I was just, and still am, blown away by the main character Della, by the world Veselka created, the sentences she constructed. The setting is almost now, but there just happens to be a war waging on US soil. A 27-year-old woman is living her life in this world. Everything is off kilter, but familiar and intimately recognizable.

I am totally psyched that Veselka is reading at Experiments and Disorders, the literary series I co-curate with Tom Cole at Dixon Place in New York, on October 16th at 7:30 PM. Happily, she agreed to answer a few questions via email.

Christen Clifford: What was your life like during the four years you worked on Zazen? When did you write? Was it a schedule or in fits and starts? How would you characterize that period of time, especially now, looking back with a prize winning novel?

Vanessa Veselka: Zazen took over my life during the time I was writing it. I went deeply into debt (I was already there; I made it worse) and made many disastrous decisions. Some of the time I was finishing an undergrad degree, at other times I was waiting tables or driving cab. There's nothing romantic about being broke, especially when you're almost 40 (I'm 43 now). I also have a daughter and that makes it even more intense. When I take another lousy job because I want the freedom it provides, what does she lose?--You think about all these things. So my life always felt emotionally brittle and strained.

I'm also a slow writer so I have to work longer hours and get up early to work. Now, going back into this new novel I will probably get up at 5:30 am 5 days a week for the next two years and work. I always schedule whatever money work I'm doing around my writing time. Sometimes that's not possible, of course. Looking back, I just feel lucky. It all sounds fine in retrospect, but could just have easily gone another way. And that's why I really believe in living around and with other artists. An artistic community will save you. You have to be around people who understand why you would do something so apparently hopeless--writing, painting, whatever-- with such blind commitment. No one else will (unless you get famous).

In November, I plan to go back into my cave and cut my internet. I'll restrict 85% of all conversations to close friends and that will be my world. Three times a week I'll go to a coffee shop to get online, but mostly everything that seems near and real now will be far away. I will go back to my artist friends / community. It has taken me years to figure any of this out--how to work really hard, how to do things for no reason at all, how to live with failure and invisibility--and these are the things I now rely on.

Christen Clifford: Do you mind me asking you about your daughter? How old is she? Do you live with a partner? I understand if you prefer not to answer questions that are personal. I have two kids and a partner and I feel their influence. What writers have influenced you the most and why? Who were your favorite writers as a child? More specifically--who do you remember being your first "favorite writer"?

Vanessa Veselka: Forgive me, but I'm going to pass on talking about my daughter because the GQ piece that's coming out has some very creepy personal info that may make me a freak magnet for a bit and I don't want my personal life out there too much.

To answer your other questions: As a kid I wanted to be an archaeologist and was obsessed with Heinrich Schliemann so biographers of amateur archaeologists who inappropriately draped their wives in the treasures of antiquity figured highly. I read a lot of British classic kids lit, too. Then sci-fi/fantasy like a crack addict in my tweens--Heinlein, Asimov, Herbert, Tolkien, and a whole bunch of trashy serials that elucidated the difficulties with becoming an incredibly powerful wizard. After that I mostly did drugs for while. Then, in my later teens, I discovered Dostoyevsky and Tolstoy, Hesse and Hugo and read almost nothing written originally in English. In my twenties, thirties I moved into Joseph Conrad and Buddhism and read people like Paul Bowles and Cormac McCarthy.

As far as influence, I feel the influence of all of them on my internal world. What shows, I cannot say. I don't think I ever went through a period where I wrote like a specific person but I know I have gone through periods where my work was in conversations with various mentors, living or dead.

Christen Clifford: What recent works of art made you laugh? And what made you cry?

Vanessa Veselka: Danielle Henderson's book "Feminist Ryan Gosling" for both. She's a genius. Feminist Ryan Gosling has been radically underestimated. A black woman hijacking the white, male, celebrity-status and privilege of Gosling to spout feminist theory in a somewhat endearing (though brilliantly paternalizing way) forces people to question their relationship to all those things. And this is why I laughed and cried. It's obviously funny to 'hear' Simon De Beauvoir come out of Gosling's mouth, but beyond that I experienced such comfort from the memes that I had to face my own embarrassing desire to get that comfort from a cute, white, heterosexual male. Is it because I long for a deep understanding of feminism that extends beyond women? Or is it because I have patriarchal DNA that cannot be dissolved and Ryan Gosling has now given me permission to self-liberate? And that's when I cried, for the longing and for an inherited culture I cannot fully shake. I am very curious about what it evokes in male readers because I think everyone who encounters the book or the multiple memes online has to look in the mirror some. Brilliant. Brilliant. It's like a goddamned critical theory cat toy.

Christen Clifford: What do you eat in the morning? What kind of clothes do you wear? Do either of these things have an effect on your writing?

Vanessa Veselka: I eat like a hippy for the most part--green juice, oatmeal with nutritional yeast, nuts, salmon...but when I come to NYC I go to Rocco's near where I grew up for cannoli. Pistachio--no chocolate chips. I love espresso and that helps me write. Until I drink too much, cry and fall into despair.

I'm ritualistic in my writing but not about clothes. I'm a morning writer so it depends on whether I have to get my kid to school or not. I suppose in a perfect world... I like to write on caffeine and an empty stomach in my underwear after fifteen minutes of yoga. I talk to myself incessantly as I write because I'm a little Socratic in my process.

Vanessa Veselka has been at various times a teenage runaway, a sex-worker, a union organizer, a student of paleontology, and a mother. Her work appears in The Atlantic, Tin House, The FSG anthology Bitch: Feminist Response to Pop Culture, and Maximum Rock ’n’ Roll with work forthcoming in GQ and Zyzzva. Her debut novel, Zazen, recently won the PEN/Robert W. Bingham Prize "for an exceptionally talented fiction writer whose debut work—a first novel or collection of short stories was published in 2011" and is a 2011 finalist for the Ken Kesey Prize in fiction.

Zazen was published by Red Lemonade in 2011. Read more about the book here: http://www.redlemona.de/vanessa-veselka/zazen

Christen Clifford is a writer and performer in New York who curates the literary series Experiments and Disorders at Dixon Place. Her performance Abreactions: Our Feminist Performance Art is currently being presented by Dixon Place and Charles Bank Gallery. Keep up with Christen here: http://christenclifford.tumblr.com/
Posted by Karen Lillis at 6:33 AM No comments: