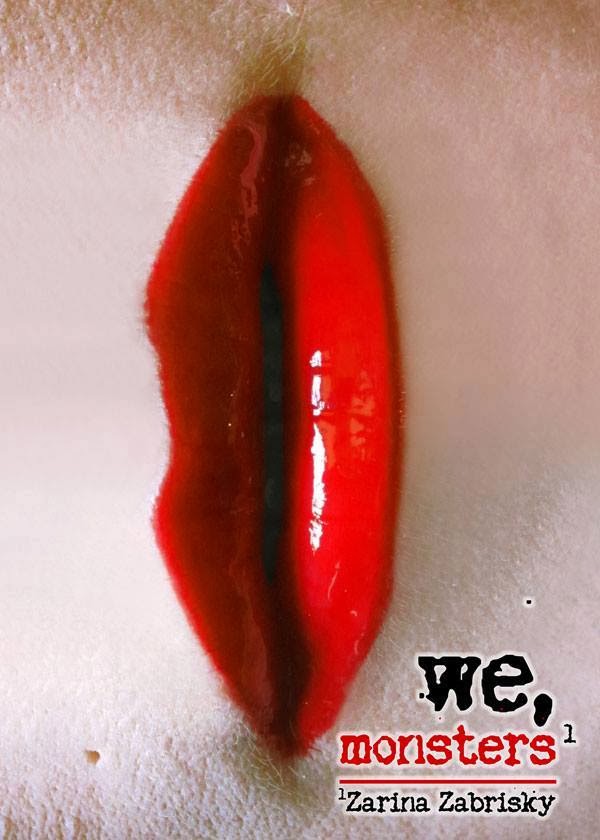 We, Monsters offers reader entertainment with both light and heavy topics – there be dungeons and dominatrices, manicure studios, the emotional frustrations of a housewife in American suburbia, spies in Odessa hotels, Vogue-smoking women in stilettos, a broken childhood, and the dream of an ice cream van, just to name a few examples. As a novel, it ties together beautifully the very flighty feelings and observations of fugitive moments--a reflection in a glass here one moment and gone the next--with the heavier, less digestible feelings and memories that can plague someone for a lifetime.

"I couldn’t unglue my eyes from the puddle. It was quivering, and the eggshell walls of my living room jiggled. My wedding photo and the rainbow-hued vase trembled and blurred. This is how my lost time always started."

As a special extra, the hip meta-twist, this novel provides in fact not only itself, but also a comprehensive set of footnotes and comment apparatus in the voice of a psychologist putting name tags to all the feelings and behaviors that readers will be shown. As it happens, it’s also a conversation with a psychologist that forms the center point of the book, neatly parting the novel into two halves. Those two halves of the book are complementary to each other but actually very different, so that readers are getting almost a double bill.

In the first half, we see a young-ish woman – approaching middle age, but not quite there yet – in the suburbs of San Francisco. She’s a dedicated wife, mother, and domestic goddess, and she starts letting "us" into her life as she is toying with the idea of working as a dominatrix, at the starting point of writing a novel on the subject. She shares with her reader, then, her preparations: how she gets herself one sexy outfit, phones up for the job interview from a gas station payphone, drives off to her first job in a dungeon, works under a grotesque man-woman character of a madam and alongside meaty other ladies, etc.

"Fat caterpillar eyebrows crawled up. Beady eyes drilled through me. After a long moment, the mustached upper lip twitched into a grin. A long hair sticking out from the mole on the side of the hooked nose trembled, and Margaret said, in the hoarse bass of a retired sailor: 'Come on in, doll.' "

Then we move on to girls, clients, and the torture garden madness. All along, the narrative female voice strews little hints and shadows of her childhood and youth, chapters of her life that she has left behind her, in Odessa.

In the second half of the novel, here we are at last, in Odessa with the seventeen-year-old self of that same now-mature woman who was just writing about dropping her children off at school in the suburbs of San Francisco. The Odessa part of the story moves backwards from the moment when the narrator’s beloved sister, Oksana, is turned into a prostitute by an army general, setting her up in a swanky apartment smack in the middle of town, covering her in diamonds and designer clothes.

"He fed her chicken Kiev and poured her sparkling sour champagne, and she never stopped laughing. In three weeks he rented a four-bedroom apartment for her—antique chairs with lion paws, crystal chandeliers and midnight-blue velvet curtains—right on Deribasovskaya. My grandmother marched there to claim Oksana, and I followed her, hiding behind taxicabs and chestnut trees. I would never forget her face on that day. Grandma Rosa never cried, not at her husband’s funeral, not at her daughter’s funeral (...)."

Like a sea receding at low tide, the story here (in between present tense scenes in the dungeon and suburbia) moves back and back, to more and more distant childhood memories, that are as painful to the narrator as they are narrated in crystal-clear detail, whilst, at the same time, they are presented in such a phosphorescent, glassy, iridescent light, that they elude grasp.

"When I was little, the world had colors. My past burst with the bloody red of cherries, the rainbow brightness of beach umbrellas. It was smudged with the jet black of Grandma’s pumps or Oksana’s mascara. It was 3-D (...)."

Here, the architectural design of the steps in Odessa, the famous stair built in such a way as to convey the optical illusion of infinity, becomes the vehicle of the wish to believe that the mother’s suicide at three years old was not real. Here, the adored older sister is seen selling pistachio ice cream on the beach, even if, as the close reader will observe, there was no pistachio ice cream in the Soviet Union.

The novel is rich in imagery and tropes, in particular those related to delicate colors, rainbows and iridescent patterns, which not only prettify the flow of the read and introduce a glittery sprinkle of magic in the style of the old Russian novels, ballets, and fairy tale cultural patrimony. These images looming in the background of the story also become symbolic dots that readers can connect in order to better understand the person telling the story, and to look inside the thinking and viewpoint of the narrator-character: this woman whose life is torn in half, whose new life is nothing like the old, and yet, is very much the same: all too much the same.

"I thought about Vickie, Vanessa’s sister, and imagined her climbing the railing, imagined being her: dizzy, out of breath, as if I were about to give a public speech—in English. Like Vickie, I lost myself."

In this sense, it’s as much a book about migration, about subjective space, symbolic times, and personal memory, as it’s a book about perverts ("monsters"), abusers, and the abused, and the circle of abuse--in San Francisco, in Odessa, or anywhere.

The things I’ve said here paint only a very schematic and subjective picture of a far more rich and complex, intricately structured novel full of interesting time lapses, one that shuffles nervously, yet gracefully, around a number of compelling spaces and characters, spinning out many extraordinary dreams. We, Monsters provides an utterly intense experience: a totally immersive reader-narrator fusion.

Guest Review by Polly Trope
author of the novel Cured Meat (Oneiros Books, 2013)
Read an interview with Polly Trope at Soundsphere: http://www.soundspheremag.com/reviews/book/author-spotlight-polly-trope/
Posted by Karen Lillis at 2:47 PM No comments: