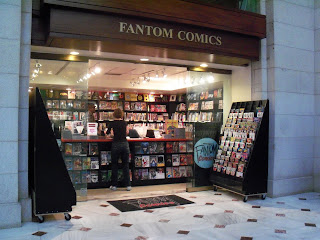 I had a brief trip (or a long layover) to DC last weekend and I got to cruise a few indie bookstores.

Fantom Comics is a small but (neatly) dense comic store. I was surprised to discover it in a first floor corner of beautiful Union Station soon after stepping off my Amtrak train. But Fantom’s location seems to fit well with one of their mission statements: “To introduce this under-appreciated yet quintessentially American art form [comics] to the public at large.” Carrying both serials and graphic novels, they had a small section of indie publishers including titles like Blankets (Top Shelf) and Love & Rockets (Fantagrapghics), and work by Charles Burns; that whole wall, in fact, was dedicated to non-superhero graphics. A small shelf nearby held comics collector supplies: plastic slip covers and cardboard backings. But the store was mainly featuring the more standard WHAW-POW! fare: DC and Marvel, X-Men, Batman, and She-Hulk, with some zombies and vampires thrown in for good measure. One-dollar comics had a large display, and Archie comics featured prominently on an all-ages rack. As I made my way around the central island that housed Fantom’s register (creating one square aisle around it), two clerks were doing what bookstore clerks do best: hashing out a recent breakup in a fishbowl. Actually, it's interesting to me that co-owner Matt Klokel has said that Fantom was inspired in part by the movie “High Fidelity”—he wanted Fantom to be the opposite of the shop dominated by snobbish, know-it-all clerks.

Fantom opened in 2005 in Tenleytown (Northwest DC) and moved about three years ago to Union Station. (From October 2009 through May 2010, they also had a store at the Pentagon City Mall in Arlington, but a technicality in their lease forced them to give up the space.) I really liked the feel of the compact, concentrated store set-up with so many face-outs. It felt a lot like a magazine shop you’d find in a train station, but without all the distractions: without the gum and candy, the souvenir keychains or the Vitamin Water, the antacid tablets or the neck pillows. Just comics. 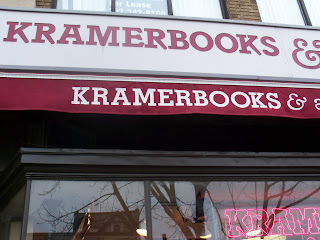 Next I headed to Dupont Circle via the red line where Kramerbooks & Afterwords is a stone’s throw from the north exit of the Metro. I wasn’t even sure it would be open on a federal holiday, but I found it hopping with folks browsing, buying, and meeting friends for lunch in Afterwords, the bookstore’s attached café. Kramerbooks and its café have been around since the 70s, and the bookstore is known for its left-wing non-fiction, strong selection of literature, counter-cultural bent, and for being one of DC’s favorite pick-up joints. 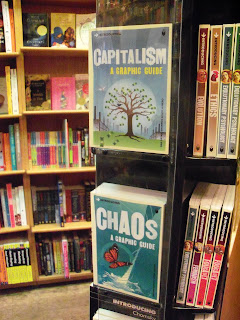 Some titles that caught
my eye were Emergency Sex and Other Desperate
Measures, an account of war-torn Cambodia in the 1990s told by three UN peacekeepers who face the limits of their idealism; The Atlas of Remote Islands: Fifty Islands I Have Never Set Foot On and Never Will written and drawn by Judith Schalansky; A Voice from Old New York: A Memoir of My Youth, by novelist Louis Auchincloss; and Brooklyn Was Mine, a non-fiction anthology. The register area featured tongue-in-cheek titles like Where’s Bin Laden?; Who Hates Whom: Well-Armed Fanatics, Intractable Conflicts, and Various Things Blowing Up, A Woefully Incomplete Guide; and the anthology 101 Places Not to See Before You Die. Tinkers (Bellevue Literary Press) and a novel from McSweeney’s stood out as two featured small press books.

While I explored Kramerbooks' shelves, two friends chatted about the Kindle over a table of paperback fiction by authors like Nicole Krauss and Dave Eggers:

“To be honest, I’d rather have a book in my hands.”

“Really? You strike me as a Kindle kind of guy. Maybe once you tried it….” 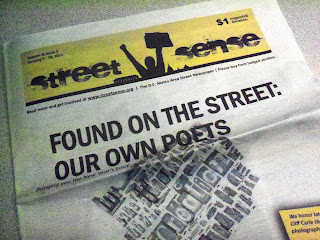 Walking down Connecticut Avenue to the next bookstore, I bought a homeless newspaper, Street Sense, from a friendly street vendor. I later enjoyed the issue very much—I read the news that homeless newspapers have recently been started in Huntington, West Virginia and Greensboro, North Carolina; and that tragically, homelessness in veterans is up 85% over the last two years in Alabama (and is on the rise in the US in general). I read an inspiring profile of a formerly homeless fellow, and I really liked two poems by an ex-con, featured in this poetry issue. In the city where the political circus rules the headlines, Street Sense chronicles the struggles and everyday stories of the growing underclass. I’ve long thought that homeless newspapers are a great example of the independent press doing its job—providing a truly alternative set of stories to those of the corporate media. 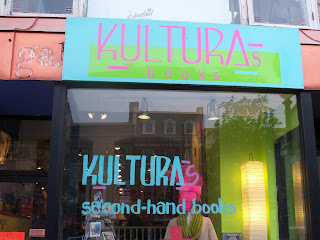 KULTURAs reminds me of funky stores I used to find in DC in the 1980s. The two-story, human-scaled, mom-and-pop shop deals in secondhand books as well as a small selection of vintage clothing. Known especially for their art and photography books that fill the center of the long space, I found myself making a beeline for their paperback fiction. I had told myself I wasn’t going to buy anything today (or ok, maybe ONE novel), trying not to weigh my suitcase down with books. But in a good used bookstore, looking means buying. At least for me. Honestly, I have no idea what all this fuss is over e-books and Kindle: My idea of paradise is endless hours browsing in bookstores run by book buyers who know something about good literature and great presses. Heaven is losing hours carefully moving one pile of books aside to expose other rows of books, in search of the book I forgot I wanted, or never knew about before now, or never saw in such a good-looking font.

KULTURAs never disappoints. The last time I was here, I bought a gorgeous edition of the collected novels of Jean Rhys, complete with Paris photos by Brassai. On this visit I found many more than one book I wanted to buy: An early title by Clarice LiSpector, Night and Hope by Arnošt Lustig, a handsome John Edgar Wideman, a book about Kathe Kollowitz on Feminist Press, an album of photographs and ephemera connected to the writings of Isaac Bashevis Singer, a Grove edition of three novels by Witold Gombrowicz in one volume, early poems by Marge Piercy, a great looking copy of The Street by Ann Petry. I kept picking up books, carrying them around, discovering others and putting some earlier finds back on the shelf. I wanted them all, but the books that came home with me were three: The Situation in Flushing, a memoir of a small town Michigan childhood by the author of Subways are for Sleeping; The Queue, a banned-in-USSR experimental work by Muscovite Vladimir Sorokin; and an old mass market copy of Elizabeth Hardwick’s Sleepless Nights. 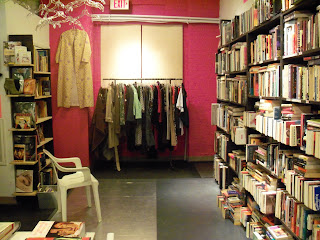 Several customers came in and out of KULTURAs in the time I was browsing and sweating over my books, some to try on gorgeous vintage dresses, and a few George Washington University students looking for a Toni Morrison title. Though the owner searched even on his hands and knees, he reported, “It looks like that's the only novel of hers I haven’t got.”

KULTURAs started out in DC in the late 80s, but the owners moved their store to L.A. in 2005 for a change of pace, enjoying the surfing and good weather of Santa Monica for three years. They returned to Wisconsin Avenue, and in February 2010 opened a second store on Connecticut Avenue just north of Dupont Circle, in the neighborhood where it all began. 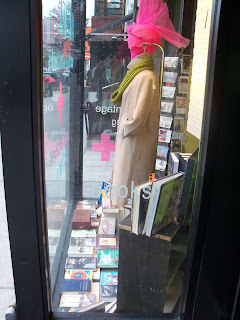 The owner and I chatted about bookstores and cities while he rang me up.

“Business is alright,” he told me. “Much better here than on Wisconsin Avenue.” When he heard that I live in Pittsburgh after years in New York, he asked how I liked my new city--”I keep hearing good things.”

Me: “It was definitely a culture shock at first, but I like it now...it keeps growing on me. There's a lot going on.”

KULTURAs: “When you get off the East Coast, it takes some getting used to....but once you look around, it’s more interesting...I think.”

Me: “Yeah, well, the East Coast is the known entity.”

*****
Like I said, it was a very brief stop-over in DC, and my itinerary left out some great bookstores. Next time, I plan to revisit Busboys and Poets and check out Second Story (a strong recommendation from Issa's Untidy Hut) and Politics and Prose (RIP cofounder Carla Cohen).

Thanks to my brother Mike for alerting me to both KULTURAs and Busboys and Poets.
Posted by Karen Lillis at 12:20 PM

Thanks for your insightful tour of a few DC bookshops. I enjoyed your commentary and as I read your words, I realized that my so-called "inside perspective" means little when it comes to the eclectic interest of book lovers nationwide.

Your journey journal left me wanting more, as does much of your writing experiences, and I hope to learn much more about Kultura in my next book immersion sojourn to Dupont Circle.

There is no doubt that the trifecta of Second Story Books, Busboys & Poets, and Politics & Prose would equate to a book lover's goldmine in your next visit to our nation's surprisingly culture-rich capital. Cheers, DC

I'm pretty sure that you could find Lustig's Night and Hope and the Grove Gombrowicz triplet on your housemate's bookcase. And probably the Wideman.
Just saying.

indie bookstores are the best places to find books. great post. thanks for all the pics.

Amen! I love a real book whether soft or hard cover. I also can not resist a book store of any description. Real books are the way to go even with the musty old book smell

the post and photos are lovely! makes we want to go out and browse.

Busboys and Poets and Politics and Prose are a little harder to get to by metro--but definitely wonderful. Kramer Books is an old favorite. So nice to see them all mentioned!