The Revolution Will Be Cataloged: Introducing OccupyWiki 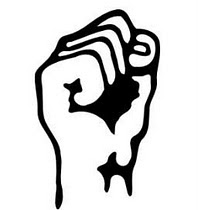 Yesterday I spent a good chunk of the day adding pages to the new wiki site, OccupyWiki. This site, created by Sarah Keefe, has an enormous potential. Specifically, its current structure asks for one page to be added for every city and town whose citizens have joined in the Occupy movement for solidarity with Occupy Wall Street. If these pages are added and then filled in with accurate information provided by citizen journalists, librarians, and/or participating demonstrators, it will become an invaluable information service and document of witness.

I stand in support of the Occupy Together movement. I believe that it is, at its core, not primarily a movement of the angry or the radical, but rather of many, many fed up citizens standing up to be counted. Citizens are being cut out of the civic conversation, civic and human values are being cut out of the national conversation, narrow interests have hijacked the phrases and vocabulary of the national rhetoric, and citizens are finally, at long last, stepping out of their houses to participate in a conversation in the street. To me, this is participatory democracy at its simplest. First, we step out of our isolation. Next, we stand together and have a conversation. And see where it goes.

I'd like to draw a distinction here about the internet's role in this movement. The Occupy movement is not something that is happening on Facebook, on the web, on petitions, or on Youtube. It is something that is happening in people's hearts and in the streets and in encampments. But the internet can sometimes help get the word out widely and quickly, and other times be an important witness, and still other times set the record straight against misinformation or under-reporting. I mean to stress that it is not enough to sign a petition, or follow the New York news stories, or enjoy the Flickr pages. I believe that the citizens everywhere need now to stand in the streets and be counted in person if they wish to make a show of strength against corporate rule. But I believe that OccupyWiki can help by bearing witness (in one place) and offering an accurate and easy-to-read document of how many people are marching, how many people are camping out, and how very many cities are "Occupying."

This past Saturday evening, when I was searching for news of which U.S. cities had held "Occupy" rallies and marches on October 15th (in a worldwide show of support for Occupy Wall Street), I was surprised. I was surprised at how little coverage there was of the U.S. protests, how hard it was to find clear and authoritative information, and how inaccurate, downplayed, and/or erratic was the information coming out of my own city's news sources (Pittsburgh). I'm happy to say we had about 2,000 marchers here, but the estimates given to the press were anywhere from "500" (one frequently-cited police estimate) to "3,000" (an organizer estimate) to "4,000" (a different police estimate). (It may be true that up to 3,000 participated throughout the day but that only about 2,000 were ever gathered at once.)

When I started working on OccupyWiki on Sunday, I was adding skeleton pages for American cities that have started Occupy movements. The first thing I would seek was an official webpage made by City X's organizers. Many cities' Occupiers have websites full of interesting information, event calendars, calls for donations for overnight demonstrators, and pages for photos and videos. On the one hand there are some impressive websites that have gone up very quickly. But on the other hand, the most time-consuming part of my wiki process was finding specific information on each website. Sometimes I couldn't tell from an elaborate website where the encampment was located, and sometimes I couldn't tell if the encampment was still intact. Many times the hardest thing to find on the site was direct contact information. This is another vote for a site like OccupyWiki. I find the format of a wiki a democratizing way of looking at information. Imagine if in one place you could see a list of all cities "Occupying," and then on each city's page, you knew you could find reliable categories of up-to-date information. How many people are spending the night to show their support. How much flack they've gotten from the police. Have they had local media problems like consistent under-reporting, low numbers reported, media blackouts (San Francisco), or hacked websites or Facebook pages (Philadelphia)? Or have they, like Cleveland or Los Angeles, had vocal support from the city itself? One librarian I corresponded with wants to know which occupations have libraries.

Meanwhile, users of Flickr and Youtube are contributing important visual documents of how many people are out on the streets, how creative their protests are, how energized are their marches. I'd love to see a Flickr pool for each city and a link to that pool on each OccupyWiki page. And Twitter continues to be recommended as the best way to get up-to-the-minute information from numerous citizens who are on the ground in each locale (more reliable as a whole than just following one Twitter account). I've been researching the hashtags for each city, which are sometimes just the obvious like #OccupySyracuse or #OccupyMadison, but other times a regional abbreviation like #OccupyNOLA, #OccupyPGH, or #OccupyCincy.

I was heartened, of course, to hear how many cities worldwide protested on October 15th, and the massive numbers in certain cities like Brussels and Madrid. But I'll admit I'm particularly heartened by the American protests, because Americans don't generally protest. And I'm afraid that the numerous American protests are being under-reported and mis-reported by the national media, and often enough by local news.

Which brings me to another thing I find democratic and necessary about the wiki format. If traditional journalism (a crucial branch of any healthy democracy) is failing us via both budget cuts (resulting in under reporting) and corporate ownership of news outlets (resulting in inaccurate reporting, slanted reporting, or media blackouts), then citizen journalism must save the day. I am not trying here to malign or dismiss journalists on the whole, but to stress that this Occupy movement will be perceived through not only editorials, blogs, and daily news reports, but through information itself. The citizens both inside and outside the movement deserve to see a clear and accurate picture of the Occupy protests, camps, numbers, and activities.

Sarah Keefe, who identifies with Occupy Boston, started the OccupyWiki (see OccupyWiki.info) with free, open-source software from MediaWiki on October 5, 2011 because she didn't find any other site like it on the web at the time. Inspired by a fellow Boston protester's crowdsourced document online, she originally created the wiki thinking it would be used by protesters who could amass and share "relevant reading, useful videos, news coverage, protesting and camping tips, and local information about their own protests." Now Keefe says she sees Occupywiki.org has cropped up since she last looked. In a web 2.0 world, it's hard to say if both will flourish, or if one will stress a different aspect than the other. But I am heartened by the Occupy movement itself and want to help show its true and accurate side through clearly-presented facts to citizens seeking to inform themselves.
Posted by Karen Lillis at 11:24 AM

Last night I wondered about there being a zine library on site.

Very well written. Much impressed. Keep posting. Do stay in touch. Thanks.