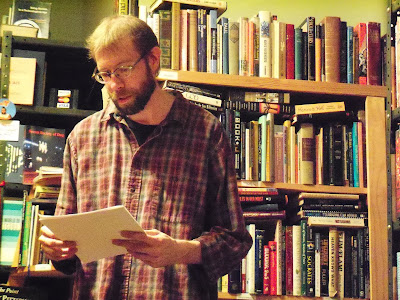 Poet Kris Collins reads at Awesome Books, Pittsburgh.
September 2011.
More small press recommendations today come from Kris Collins, one of Pittsburgh's small press movers and shakers. I think of Kris as "the bard of Pittsburgh" because I love the tavern's-eye view of the city found in his poems about his artist and writer friends gathered around beer, hope, smoke, frustration, and transition. Not only does he write richly moody scenes evoking the ghosts of Pittsburgh's past peeking through as the former "Steel City" aggressively remakes it present, but he chronicles the last few decades of the city's bohemians as well as anyone I've heard or read. His most serious competition may be the authors he's started publishing on his small press of limited edition poetry books: Low Ghost Press features two of Pittsburgh's most keen-eyed poets, John Grochalski (now a 'Burgh ex-pat living in New York) and Bob Pajich. Kris doesn't care about competition. He'll even read poems by other people at his own readings.
Kris manages one of my favorite bookstores in town, Caliban Books, and runs Desolation Row Records out of that store. He has been an active member of The New Yinzer litmag for several years and co-hosted their reading series with writer Savannah Schroll Guz for its first few seasons.
*****
1. Past All Traps, Don Wentworth (Six Gallery Press) 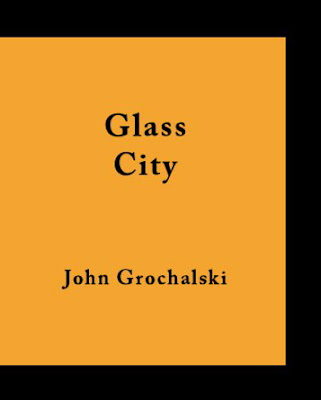 nice! some more things to look for.