Ten Reasons Why We Should Help St. Mark’s Bookshop Survive 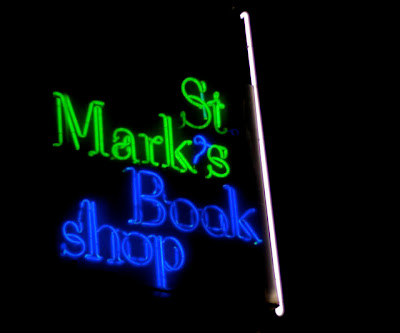 May 15, 2014 update: St Mark's Bookshop has signed a new lease on East 3rd Street, is contemplating non-profit status, and is less than $8,000 away from their moving money goal on Indiegogo: https://www.indiegogo.com/projects/st-mark-s-bookshop-on-the-move

You may or may not have heard that indie St. Mark's Bookshop in New York is trying to raise funds to move to a cheaper space in their longtime neighborhood, the East Village. Currently, their landlord, Cooper Union, has given them a temporary (and slight) discount in their rent, but when it goes back up to the "normal" astronomical $20,000/month at the end of the year, the store fears they will be forced to close. Their campaign at Lucky Ant has been going strong but still needs your help with less than a week left to reach their all-or-nothing goal of $23,000. Specifically, they need to raise $7,000 in four days. Please consider donating.

Here's why I think it matters:

1. St. Mark's is a terrific bookstore with top-notch book buyers.

It’s hard for me to describe in a short space how much I admire this bookstore and its place in American letters, so I’m writing a whole book about it. I had the pleasure of working at St Mark’s Bookshop from 1997 to 2005, and I'm currently writing a memoir about my years there. You can find eleven installments of this book at Undie Press including my observations on which types of people shopped there (from book critics to New York poets to indie rock stars to out-of-town intellectuals to architects to DJs to academics to performance artists to filmmakers to expats to internationals) for what books (design, poetry, photography, cutting-edge fiction, cultural criticism, art porn, zines, queer theory, the latest lit or lifestyle magazines); which celebrities browsed there (like Susan Sontag, Thurston Moore, Richard Howard, DJ Spooky, Diamanda Galas, Harmony Korine, Jim Jarmusch); and what books meant to the people who worked at the shop. My opening chapter gives an overview of why I think St Mark's Bookshop deserves a permanent place in literary history.

As a bookstore, St. Mark's holds an institutional memory of major moments in alternative publishing history. The owners (and some longtime employees) both worked at 8th Street Books, which was the New York bookstore the Beats frequented and the New York bookstore that embraced the "paperback revolution." Both owners worked also at East Side Books, an East Village bookstore which was known as a place to find underground comics, mimeographed novels, and local political pamphlets—at a time when these were a major currency of the cultural revolutions and the avant garde. St. Mark's opened in the late '70s, making a place for artistic expressions to live and breathe alongside new areas of inquiry we take for granted today, such as sections with labels like "Vietnam Studies" or "Lesbian and Gay Studies."

Located in the center of the vibrant and bohemian East Village, the bookstore has long been a place that sells today's forefront thinkers (or poets, or photographers) to tomorrow's celebrated writers (artists, musicians, academics, etc). Writer/editor and former employee Ron Kolm has said, "I took a pay cut to work at St Mark’s Bookshop [in 1985] because I knew that the art scene in the East Village was in full bloom, and I knew that the fiction scene was about to explode, and I wanted to be a part of it." In my time, St. Mark's was known as the store in New York with the widest selection of zines, poetry, and literary magazines, not to mention all the anti-war underground newspapers that showed up circa early 2002. Now it’s the Occupied Wall Street Journal they're distributing, and their newish reading series has hosted such literary lights as Sarah Schulman, Kate Zambreno, Michael Moore, Eileen Myles, Laurie Weeks, Tao Lin, Marie Calloway, Giancarlo DiTrapano, Samuel R. Delaney, and Gary Indiana. Ever since its opening in 1977, the authors, customers, and clerks of St. Mark's have been involved in an easy and fertile conversation hosted by the bookstore. In every era of its existence, St. Mark's has had a keen eye for offering (and a knack for attracting) the cutting edge literature, art, and thought of its time—and the privilege of introducing such books to many of those very creators. To my eye, this store is a living legacy worth helping to survive another 35 years.

3. Give the store a level playing field: help St Mark's Bookshop move to a smaller space with reasonable rent.

People read about failing bookstores and they think the era of the bookstore is simply over. Progress has happened, the ebook has won. Not true. Many bookstores all over the country and all over the world are still thriving. The brick and mortar bookstore isn’t over—but the ones that survive this change in publishing (and this devastating recession) have to get smart, slim down. This campaign IS St. Mark’s getting smart. The fundraising campaign represents a series of business decisions—to use 21st century tools, starting with Lucky Ant (the Kickstarter-like platform hosting the fundraiser), proceeding to a re-vamp of their online presence (bookstores that survive often claim about 25% of sales online), and slimming down by seeking a smaller store with more reasonable rent. Soon their rent will go back up from (current "rent-reduction") $17,500 a month to $20K. Think YOU can move that much merchandise and still support several employees? When St. Mark's opened in 1977, their rent was $375 a month. Today's rent, as they say, is too damned high.

4. A level playing field means the bookstore can become self-sustaining doing what they do best: selling books.

You've heard about how well Strand and Book Court are doing? They own their own buildings. This is relatively rare among bookstores. When the great bookstores of 4th Avenue [once known as Book Row] started to close or move en masse in the 1960s, some booksellers lamented that they wished they had bought their building when given the chance. Translation: All bookstores, even the best ones, need an affordable situation to ride out times of change.

5. Even though Brooklyn is the hottest thing since sliced (artisanal, five-grain) bread, downtown Manhattan, home of St Mark's Bookshop, is still the place where people meet in the middle of surrounding locales (from Hoboken to the Upper West Side to Brooklyn and Queens)—as it has been since the Native Americans used it as a busy trading post.

6. This retail bookstore in the heart of the publishing capitol has done so much for the small presses.

7. Don’t lament the passing of a great bookstore when you have a chance to help.

I have heard people "mourn" the bookstore already in that laziest of ways: "Another great New York institution is on its way out." Or, "Another great bookstore that can't stand up to Amazon." Curb the instinct, folks. The bookstore is not gone, it's not over, and there is still time to do something. Put your money behind your hope, not your dread. Donate here, in exchange for gift certificates, discounts, and tickets to the grand re-opening: http://www.luckyant.com/nyc/east-village/index.html

8. St. Mark’s Bookshop is neighborhood bookstore to the world.

I mean this in two directions: One, the world comes through New York and many stop into the store when they're in town, adding to the terrific mix of customers. And two, the East Village is "home" to every artist and bohemian who wants to claim it: The East Village is not just a place but a state of mind. To me, the East Village will always stand for art that takes exciting risks both in form and content; street-smart, nuance-wise, aesthetic-minded intellectualism; and a politics of the people. For 35 years, St Mark's Bookshop has curated a selection of books and materials that is aware of these three components of the neighborhood's proud output and hungry reading and culture needs. Think of them as an import/export service to and from an ever-replenishing source of the avant-garde. Thank them by donating here: http://www.luckyant.com/nyc/east-village/index.html

9. Be (part of) the subsidy that small businesses don't have.

Small businesses like St. Mark's Bookshop are thrown to the sharks of the "free market" while corporations like Amazon and Barnes & Noble receive tax breaks and strong-arm publishers into (unsustainable) massive discounts. "Non-profits" like Cooper Union also get tax breaks and other subsidies. Yet small businesses are the ones who hear, "Well, if you can't sell enough books to survive, then I guess the free market has spoken." Why doesn't anyone say to Amazon, "Awww, poor baby, can't survive selling books at retail price? Can't hack it asking people to work at a human pace and temperature? Can't make enough to pay your taxes? Boo hoo!" Amazon is a market bully. While brick and mortar bookstores gladly coexist with each other (St. Mark's has survived the arrival of indie McNally Jackson, and even two nearby Barnes & Nobles), Amazon is a predatory capitalist who needs its teeth removed before there's a fair fight to be found. As Sherman Alexie puts it, "Amazon is in the 1% and independent bookstores are in the 99%. So who are you going to fight for?” Fight for St Mark's now: http://www.luckyant.com/nyc/east-village/index.html

I’m still mourning the passing of the great literary humanists George Whitman (Shakespeare and Company, Paris) and Barney Rosset (Grove Press and Evergreen Review). Please don’t let St Mark’s Bookshop die, too. A girl can only take so much crushing news in one year.

I worked in various NYC bookstores though the late 60s up to the early 80s, Doubleday's, Scribner's, 8th Street Bookshop, etc. Yet always through the years I would pay St Marks Bookshop a visit. They had great books especially by unknown authors and publishers no one's ever heard of. I would always pick up a book or two by one of those. I now live outside the area but recently they had my own book, '100 Whores' on sale by them, which I've donated the consignment copies to them. Hope they sell a lot. That is one bookstore I've loved over the years, and there have been many.