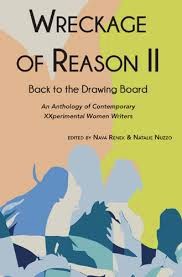 This installment in the Writer on Writer interview series has a twist: Instead of asking the participants to read a whole book, I asked two writers involved in the same anthology to read each other's anthology piece. The anthology in question is one I'm proud to be included in as well. Wreckage of Reason Two (Spuyten Duyvil, 2014) is the sequel to Wreckage of Reason (Spuyten Duyvil, 2008), and both anthologies feature contemporary women writers experimenting with prose. This week's Writer on Writer features E.C. Bachner and Lillian Ann Slugocki, two New Yorkers whose bold narrative voices pop off the page. Today E.C. (Elizabeth) Bachner interviews Lillian Ann Slugocki about Lillian's story, Streetcar Deconstructed.

Stay tuned, as always, for the second part of the interview, when Lillian will ask Elizabeth about Elizabeth's story, How to Shake Hands with a Murderer.

Elizabeth Bachner: I'm obsessed with the idea of whether there are differences between a character and a person, an author and a self, and I love the brilliant and playful way your feminist deconstruction of A Streetcar Named Desire approaches these questions. What are your ways of thinking about autobiography versus fiction, "real" versus imaginary or invented? How do you use yourself in your work? How does your work change and shape your life?

Lillian Ann Slugocki: My life is like this scrapbook of stories, and people, and cities--and I look at it, dispassionately, as the raw material for my work. But having said that, there are many layers over and under the autobiography. I layer myth--my current obsessions are Leda, Orpheus, Eurydice and Leander--as well as narrative structure--e.g. a conflict and its resolution, as well as intertexuality. I use echoes of T. S. Eliot, Virginia Woolf, Sylvia Plath, Angela Carter, plus all the lit crit I studied at New York University: Judith Butler, Thelma Shinn, Gayle Green, Mircea Eliade, Luce Irigaray, Julie Kristeva, and Audre Lord. The result is that the I, first person, in my work is me, but not me--an amplified version. Stronger, wiser, certainly more flawed, and certainly more interesting.

People who read my work are usually very quick to assume that it’s straight up autobiography, like when they read The Blue Hours, my novella about the sexual disintegration of a marriage. But real life can be very boring. I’m convinced that even memoirists are not unlike novelists--they use plot arcs, they deconstruct, compress, they add and subtract in similar ways--because it’s all in service of telling a story. And real life doesn’t contain those structural elements. There is an art to choosing where to begin a story, and where to end it, amongst all the hundreds of possibilities. The writer makes those choices, whether the genre is fiction or non-fiction. And I tend to write stories about the things that are of concern to me at any given moment. It could be identity, it could be sexuality or the female body, it could be history--and in writing them, I think I better understand the context of my own life.

Elizabeth: In your deconstruction of Streetcar..., there are so many different ways that you approach and confront Tennessee Williams as a writer, his characters, the fact of playwriting, the fact of theater, the canon. There's parody, lots of wit and fun and adventure, and definitely deconstruction--but primarily I'm left with a feeling of love for both works, yours and his. Could you say a little about your experience of this process?

Lillian: Oh God, I do love that play. I’ve seen so many versions of it-- theatrical and cinematic. Ivo van Hove directed it at New York Theater Workshop, and it was a stunning deconstruction. Life-changing. No sets, no scenery, no props, no costume changes--just a large claw-footed bathtub, stage left. Filled with water. And Blanche, played by Elizabeth Marvel, is naked in that bathtub, submerging and rising up, over and over, splashing water all over the stage and the audience--I got drenched! The spine of that production was the bathtub and the naked woman.

This is the detail the director chose as his point of departure from Williams’ text. And I knew I was going to deconstruct it, too--but it took ten years. It wasn’t until I was reading all of the above-referenced lit crit, primarily in my own ongoing search to define and categorize and reinvent the female narrative, that I thought it was time to revision Blanche. And like van Hove chose the bathtub as the point of departure, I chose the white moth, which is a relatively small leitmotif in the play. But it gave me a point of entrance--it opened the door, if you will, to her revisioned character. In my version, Blanche has a Master’s Degree from NYU (like me), and has read all the same theory, and at that point, the piece practically wrote itself. And I am making fun of the canon, as well as academic culture, of which I am a proud member, but a culture nonetheless that deserves to be made fun of. The canon, as it stands, is ridiculously outdated.

Elizabeth: When you're working--and/or reading and thinking about your own work--how do you think about your readers, your audience? Do you often have readers in general, a particular type of reader, or a particular reader in mind as you work?

Lillian: Initially, I have a word or a phrase or an image in my head that won’t go away. Like the image of the white moth on a hot summer’s night. And at that point, I’m not at all concerned about my audience. I treat my first drafts as letters to myself. It’s not until I’m on the second re-write that I become concerned with issues like: what is the story I’m telling, what is the arc, where does it begin, and where does it end, what is the through-line, what are the sub-plots, is everything resolved by the end of the story. I think my readers are people like myself; intelligent, driven, transgressive, definitely subversive.

Lillian: One way to answer that question is to say, I’m obsessed with the intersection between the sacred and the profane. Another way to answer that question, goes to back to my issue with today’s canon. I believe women have to create their own narratives, and female sexuality has been, with a few notable exceptions (Anais Nin, Colette), written through the male gaze. That just has to change, and it is changing--erotica written by women has exploded, some of it is badly written, some of it is really well written, Angela Carter comes to mind. But good or bad, it’s good to see it out there in the world. I think that means that eventually women can reclaim their own sexual identity. Right now, we don’t own it, we haven’t written that definition, or told that story yet. Even as the fourth wave of feminism rises up, female sexuality is still primarily a male trope. And that informs everything. It informs Anna Karenina, it informs Blanche DuBois, Eve, Lilith, Mary Magdalene, Cinderella. Images of women in even the most stable of texts are informed by this trope.

So that’s what it is with me and erotica--it’s another way of reframing or renaming the female narrative. It’s like saying, I've got control of this now, and the story is going to be very, very different from what you’re expecting. And I’d like to think it’s honest and authentic, even if it might be a bit hard to swallow (pun definitely intended). I think a person’s sexual identity is the still point of our turning world. It is foundational, and I’m not even talking about how a person self-identifies--straight, gay, lesbian, bi, whatever--sexuality is a driving and undeniable force in our lives. And it is definitely political. The female body is still a wild and uncharted territory, but again, this is changing. I think of performance artists like Julie Atlas Muz, Deb Margolin, writers like Erin Cressida Wilson, and yourself, Elizabeth--female artists, who, in my opinion, write beyond the ending, who write beyond the white picket fence, beyond happily-ever-after.

Elizabeth: Another of the Wreckage of Reason 2 contributors, Robin Martin, wrote that she was glad panelists discussing the anthology at AWP raised the question of what makes prose experimental. "I don’t think my work is clearly experimental," she wrote, "By that, I mean I feel my work is still very accessible. Perhaps I like the term innovative writing better. Innovative writing has a smaller audience in mind, no pre-determined formula, and exists outside of easily defined narrative conventions." I'm really interested in this question. Do you consider your work experimental? Innovative? Or do you like some other word?

Lillian: I like both words, I like experimental and innovative. Whether I’ve written for the page or the stage, my work definitely “exists outside of easily defined narrative convention.” I pitched a series once to the Director of Artistic Programming at NPR, and when he received the first episode, Earth Sinking Into Water, he said, “This shouldn’t work, but it does.” And even though I was working with an excellent dramaturge and director, Erica Gould, I didn’t understand why it worked, either, except that it did. It was non-linear, it was progressive, but still it packed a strong emotional punch at its conclusion. Now I understand that it worked because it was structured like a piece of music. And today when I’m considering a long form piece, the narrative borrows many elements from the hero’s journey, as in Joseph Campbell's call to adventure, or the refusal of the call, mentors and guides, demons and conflicts, crossing the first threshold, the supreme ordeal. Or the way back, but not the same anymore--transformed, perhaps bearing gifts. I can work with this--it makes organic sense to me.

I just finished writing a novella, How to Travel with Your Demons, and the process began with a formal question: Could I tell a story about a protagonist traveling from Point A to Point B, and leave one central question unanswered which would create narrative tension? And I could. I did. And once I established that framework, then I could create the music around it, establish motifs, smaller conflicts that all circle around the central narrative. When an editor friend of mine read it, he called it "experimental structure with accessible prose." And I thought, yes. That’s exactly what I was aiming for. And I like breaking rules, too. The story is written in shifting points of view--first person, second person, third person. Time is fluid, non-linear, circular. I know the rules, and so I can break the rules, and still tell a story. So in that sense my work is experimental, but I can’t tell a story within the traditional confines of established narrative structure. It doesn’t make sense to me as a writer, it feels foreign and strange. I love it as a reader, but that’s not the same. And I love what you wrote [in our forthcoming interview], Elizabeth, that your Wreckage of Reason Two piece, How to Shake Hands with a Murderer, is “a katabasis, a hero's trip into the underworld (and maybe back?).” Using powerful ancient storytelling techniques in contemporary stories of transformation is something I love doing with my own work. This process is really exciting to me, and maybe the katabasis will be my next method in my own search for the female narrative.


Don't miss the New York launch party for Wreckage of Reason Two, at KGB Bar on Tuesday, April 22 from 7-9pm.

Ealier in the Writer on Writer series: