I don’t know how to tell you that Jude Vachon is gone. Jude was often wildly happy and vibrant, often engaged in a new project or an ongoing effort, sometimes deeply pissed off or giggling, but she was always very much present. When you were around Jude, you never didn’t know that Jude was there. I wanted to write something to honor her “memory,” though it seems unbelievable and almost blasphemous to call her a “memory.” But I also wanted to write something to say that I’m thinking of you if you are thinking of Jude today. I know that so many of her friends, coworkers, and people in her communities are hurting over her loss. Or still just in shock. I know because even in this strange and empty pandemic landscape, it’s hard to go anywhere in Pittsburgh without running into someone who loved Jude and what she encouraged in us.

I first “met” Jude from afar when I attended the Progressive Library Skillshare event in the earliest days of my library school education. This was September 2007. A few Pittsburghers (including Jude) who could see the social justice potential of the library, created a weekend event and invited radical library giants Sanford “Sandy” Berman & Jenna Freedman to speak. This event, these speakers, the democratic nature of the event structure, got me deeply excited about being a librarian. The weekend opened my eyes to the compassion involved in making information accessible, made me think about the politics of findability and information distribution, touched on the joys of socially-conscious cataloging, and made me aware of the role librarians can play in both reconnecting marginalized citizens to their communities, and contextualizing marginalized reading materials and information sources. (That weekend was a direct inspiration for this blog, which launched a few weeks later.)

Throughout the weekend, Jude was one of the handful of people running around The Union Project in an event tee shirt, making the events happen. I say I “met” her that weekend because her face was so unforgettable. It was a face I would come to recognize over and over--that Jude face. Anyone who has worked with her on a library program or a zine fair or a craft fair or a Radical Reference action or an affordable healthcare mission will know what I’m talking about. Concentrated, animated, focused, engaged. Firmly in the trenches, firmly in her element, and never far from joy. Utterly present, utterly involved in the task at hand. And the task at hand is almost always connecting with people--through information or creativity, or a creative method of distributing information.

Jude’s face was also, at the risk of sounding trite, radiant. When she smiled there was a sudden electricity in the room, but even when she didn’t there was an effortless beauty emanating from her features. With her close cropped hair and her black Irish coloring, Jude’s face had a touch of 1940s glamour without trying. But of course once you knew Jude any amount, it always seemed like it was her radical heart that was radiating through her face. 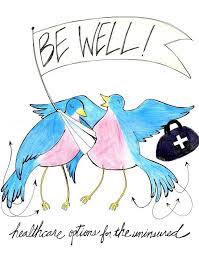 I always associated Jude with the ideals of the Progressive Library Skillshare event, and I wasn’t wrong. Jude never seemed to be far from her apparent life mission to leverage her education and her energy to help others access information that could improve their lives. One of her most widely known projects was a resource she created called Be Well! Pittsburgh. It started out as a zine and later became a website, offering detailed lists of Pittsburgh-area healthcare practitioners and clinics available to the poor, the uninsured, and the underinsured. This is the kind of information source that we are tempted to take for granted in the wealthy democracy of America, in a city lousy with public libraries, in an era of online everything at our fingertips. But it is the kind of handy resource that in fact starts with a hardworking, big hearted, skilled information professional like Jude Vachon--Jude who recognized the absence of such a resource, knew the context of that absence, and then filled that absence.

Twice in recent years I was organizing a reading and invited Jude to be one of the featured readers. I loved Jude’s writing and storytelling, I loved talking to her before and after the reading, and I was also jazzed by her commitment to zines. To me zines meant Jude was interested in the stories she was telling as well as the act of reaching readers through “the people’s printing press” (what I call the xerox machine). To me this meant she was trying to tell her stories to people outside of the literary ghetto. When I named one of the readings “Stories and Other Ephemera” (The Big Idea, 2015), I wanted the event to bridge the gap between the zine scene and the literary scene. Jude embodied that bridge in my mind, because she was a talented writer who aimed for a democratic, pass-it-around distribution rather than a climb up the literary ladder.

I knew her for a long time as Jude who worked reference on the first floor of the main public library. As Jude who had followed in Jenna Freedman’s footsteps and started a zine collection at the public library. As Jude who hosted outside-the-box events at the public library. I remember admiring her librarian life and hoping I would work there alongside her one day. I remember that one day she didn’t work there anymore. I remember worrying about her a little as she entered the gig economy and took on translation jobs for a living. I remember the colorful serenity of her spacious wood-floor apartment in Wilkinsburg, with piles of folded fabrics on a huge shelf in the living room. I remember her excitement at buying a house near the Allegheny River in the flats of Lawrenceville. I remember her sense of adventure as she traded it in for a “tiny house” she parked in Garfield.

If I tell you anything about Jude, I am bound to stress her conspicuous desire to help create a more equitable society. But I would like to add that I have known many advocates and activists, and Jude was not some of the ones you are thinking about. No person is a cliche, but many people operate as such. Jude was instead a wide human being, both consistently herself and surprising me with the reserves of energy and optimism she had for new conversations, new ideas, new projects. Jude was not the kind of activist who is angry 24/7. Nor was she the kind of activist who seems run ragged by giving away all her good will to others. The Jude I knew had a sense of self care, a sense of historical context, a sense of what needed to be done next, a sense of pleasing herself, a sense of wanting to make beauty, a sense of fun, and a sense of mischief. It feels accurate to say that every occasion on which I ran into Jude, she offered a mention of an injustice that outraged her, a story about something creative that excited her, and an infectious laugh.

It will be a while wrapping my mind around Jude Vachon’s absence, because my outstanding memory is of her earthy, expressive, provocative, fearless, vocal, stand-her-ground presence.

<3 thank you for sharing your memories of Jude, Karen!

<3 Thank you so much for posting this.

Thank you so much for writing this. Your words express so much of what I didn't know how to say. I'm so grateful to have known Jude.

thank you so much for sharing this.

Thank you for this beautiful piece and tribute. Though I didn’t know her I am inspired by her life and work. Much love to you and all those who knew her.

This is lovely, thanks for expressing this so beautifully!

Thank you for this beautiful tribute. I can really feel Jude's life, energy, forever presence in your words. I appreciate this gift to all of us who knew and love(d) Jude.
<3