Bookstore Clerks Who Write About It: A Reading in a Pop Up Bookstore 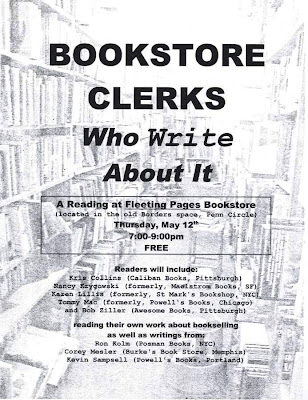 Bookstore clerks, bookstore owners, and former bookstore workers will read from their own writings on the bookstore biz, as well as the writings of others. Great indie bookstores represented include: Powell’s Portland and Powell’s Chicago, St Mark’s Bookshop, East Side Books, Jay’s Book Stall, Caliban Books, Awesome Books, Maelstrom Books, Burke’s Book Store, and more. Fleeting Pages is a pop up indie bookstore inhabiting the shell of an empty Borders bookstore from May 7th to June 4th, 2011. http://www.fleetingpages.com/

Kristofer Collins is publisher and editor-in-chief of Low Ghost Press, former co-director of the TNY Presents Performance Series, managing editor of The New Yinzer 2005-09. He is the book reviewer for Pittsburgh Magazine. He has managed Caliban Bookshop for the last 7 or so years and is the owner of Desolation Row Records & CDs. He was the assistant manager of the legendary Jay's Book Stall for ten years. A book of his poems entitled King Everything was published in 2007 by Six Gallery Press, The Book of Names was published by Low Ghost Press in 2008, and The Liturgy of Streets was published by Six Gallery Press in 2009. His latest collection, Last Call was published by Speed & Briscoe in 2010.

Ron Kolm is an American poet, editor, activist and bookseller, based in New York City. Kolm came to New York in 1970 and got a job at the Strand bookstore, where he worked with Tom Verlaine and Patti Smith. During this period he became friends and colleagues with a group of writers who would come to exemplify the Downtown scene of the 1970s and '80s. In 1985, Kolm, Bart Plantenga, Mike Golden, Max Blagg and Peter Lamborn Wilson founded the Unbearables. Kolm has been one of the editors of their anthologies: Unbearables (1995), Crimes of the Beats (1998), Help Yourself! (2002) and The Worst Book I Ever Read (2009) all published by Autonomedia. Kolm's own publications include The Plastic Factory (1989, Red Dust), Welcome to the Barbecue (Low-Tech Press, 1990) and Rank Cologne (P.O.N. Press, 1991). His work can also be found, along with the other Unbearables, in the Outlaw Bible of American Poetry (Thunder's Mouth Press, 1999), and in Up Is Up, But So Is Down: New York's Literary Scene, 1974-1992 (New York University Press, 2006). He has collaborated on a novel, Neo Phobe, written with Jim Feast (Unbearable Books, 2006). Ron Kolm has worked at many of the great New York bookstores, including: Strand, East Side Books, St Mark’s Bookshop, Coliseum Books, and Posman Books.

Nancy Krygowski’s bookstore career began at the Portsmouth Bookshop, in Portsmouth, NH. While there, she was scouted by the owner of The Book Guild, the town's huge used and antiquarian book store, as she alphabetized books and made change, and was soon recruited to work there. (The book business is a lot like football.) She later moved to San Francisco and worked at Maelstrom Books in the Mission District for several years before coming to Pittsburgh. Krygowski’s first book of poems, Velocity, was chosen for the Agnes Lynch Starrett Prize from the University of Pittsburgh Press. She was co-founder and booker of poets for the Gist Street Reading Series. She works at Greater Pittsburgh Literacy Council as an instructor and occasionally teaches poetry workshops at Pittsburgh Center for the Arts.

Karen Lillis (event organizer) worked at St Mark’s Bookshop for eight years, and is currently writing a memoir, Bagging the Beats at Midnight: Confessions of an Indie Bookstore Clerk, serialized monthly at http://www.UndiePress.com. A novelist, a freelance writer, and a small press advocate, she is the author of the novels i, scorpion (Words Like Kudzu Press, 2000) and The Second Elizabeth (Six Gallery Press, 2009) and [under the pseudonym Carol Lewis] the illustrated novella, Magenta's Adventures Underground (Words Like Kudzu with New York Nights, 2004). Her writing has been nominated for a Pushcart Prize (2010), and has been a finalist for a Golden Quill Press Award (2007). She currently resides in Pittsburgh.

Tommy Mac worked most of his adult life in libraries and bookstores including a memorable stint at Powell’s Books in Chicago’s South Loop. If you ever went there, Tommy’s not that Chinese guy and he’s not that hot guy who looks like Seal. He was that other guy dodging around in the stacks trying to avoid eye contact with the patrons. He read at the grand opening of Vox Pop Bookstore in Brooklyn, and was last heard spouting free-jazz palaver to a stonily indifferent audience at the old Bloomfield Beat Cabaret in Pittsburgh.

Corey Mesler has published in numerous journals and anthologies. He has published four novels, Talk: A Novel in Dialogue (2002), We Are Billion-Year-Old Carbon (2006), The Ballad of the Two Tom Mores (2010) and Following Richard Brautigan (2010), 2 full length poetry collections, Some Identity Problems (2008) and Before the Great Troubling (2010), and 2 books of short stories, Listen: 29 Short Conversations (2009) and Notes toward the Story and Other Stories (2010) . He has also published a dozen chapbooks of both poetry and prose. He has been nominated for the Pushcart Prize numerous times, and two of his poems have been chosen for Garrison Keillor’s Writer’s Almanac. He also claims to have written, “The Martian Hop.” With his wife, he runs Burke’s Book Store in Memphis, one of the country’s oldest (1875) and best independent bookstores. He can be found at http://www.coreymesler.com.

Kevin Sampsell lives in Portland, Oregon and has worked at Powell's Books since 1997. He runs the small press and zine sections and also coordinates their events. His small press, Future Tense Books, began in 1990 and publishes books by new and emerging writers of fiction, poetry, and memoir. His own books include the story collection, Creamy Bullets, and the memoir, A Common Pornography. He no longer has to change the marquee for Powell's.

Bob Ziller is an artist, poet, translator and singer. His translation of Jean-Joseph Rabearivelo's Translated from the Night was the first English rendering of a complete text by the African surrealist poet. His artwork has been widely displayed throughout the U.S. - some of his portraits of writers will be on display at Fleeting Pages. His book release party for Van Gogh Surfing, his first collection of poetry, will be held at Fleeting Pages on June 1st, along with Jimmy Cvetic. He is the co-owner of Awesome Books in Pittsburgh. 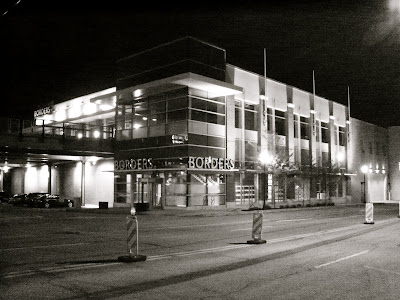