WORD UP Community Bookshop to Grace Upper Manhattan for One Month 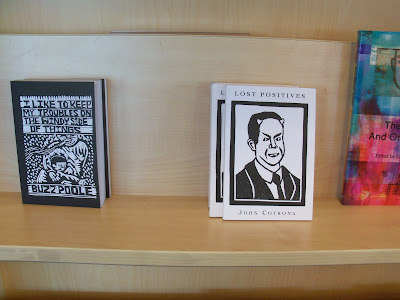 Two titles from Fractious Press as spotted on the shelves at Fleeting Pages bookstore (Pittsburgh, May 2011).

Fleeting Pages pop-up bookstore closed its Pittsburgh doors at 9:00pm on June 4th. But close on its heels, small press publisher Veronica Liu, pairing up with the Northern Manhattan Arts Alliance (NoMAA) and Vantage Properties, will be opening a Manhattan pop-up on June 14th. The new bookstore will be called Word Up, in reference to its uptown location of Washington Heights. Much like Fleeting Pages, Word Up will pop up for one month, and will be dedicated to the output (and reading/writing events) of the small press, the micro press, and self publishers of zines. The store will aim also to showcase a multi-lingual selection of books, to reflect the residents of this diverse neighborhood especially known for its large Dominican population. Inventory and events will focus largely, but not exclusively, on metro New York presses and writers.

Liu, who is managing editor of Seven Stories Press by day, and moonlights as publisher of Fractious Press by night, has been active in the micro press scene for several years. After attending zine fests and other small press fairs with a table full of Fractious wares, and hosting readings to promote the press' subversive and engaging authors, a pop-up bookstore may seem like a logical extension of such events.

But two projects through Seven Stories led equally to the idea of placing a bookstore in Washington Heights. Liu has been working with the Seven Stories Institute (affiliated with the Press, although a separate entity), which acts as a democratic disseminator of Seven Stories books and ideas. Recognizing that their radical, critical nonfiction was being distributed more widely in academic circles than in the communities such books were written to serve, Seven Stories Institute was founded in 2004 to devise ways to reach those underserved populations--whether by offering the books in Spanish, making the books available at a deep discount, or organizing community discussions. (Read more here.) In addition, Liu has been editing a forthcoming book, REBEL BOOKSELLER: Why Indie Businesses Represent Everything You Want To Fight for, from Free Speech To Buying Local To Building Communities (written by veteran bookseller Andrew Laties). Due out from Seven Stories in its second edition in July, the book (originally published by Vox Pop in 2005) has been considered a must-read among certain circles of radical and community-minded booksellers.

NoMAA and Vantage Properties have been enthusiastic partners with Liu in making the Word Up project a reality. The assisting realtor from Vantage has been excited at the prospect of both filling an unused space and seeing a bookstore come to Washington Heights. Liu says that the realtor grew up in the neighborhood and can't recall a single bookstore in the immediate area, although nearby Inwood and Harlem/Sugar Hill have had bookstores. Details for the final location of Word Up are still being worked out, but Liu has one back up location "ready to go" should her first-choice storefront fall through. The exact location will be announced later this week. [See UPDATE below.] Though utilities such as electricity and internet will create costs, the overall overhead of the project is expected to be low.

The bookstore will open during NoMAA's Uptown Arts Stroll (aka Paseo de las Artes), an annual festival featuring a month of artist exhibits, dance performances, readings, and other creative events. At this writing, Word Up store hours are set for weekdays 4:00pm-9:00pm, and weekends Noon-4:00pm, with some added hours for events. Currently, Liu is collecting the shop's inventory, which will be sold on consignment. Interested small press publishers and authors should contact her at info@fractiouspress.com to receive a consignment form and shipping address, or to propose a small press reading, workshop, or event.

See the Fractious Press events page for an update on the location: http://www.fractiouspress.com/events

...or stay tuned to this blog for additional info.


SECOND UPDATE: This article has been edited for accuracy since its original version.
Posted by Karen Lillis at 8:49 AM