A New Kind of Book Blog 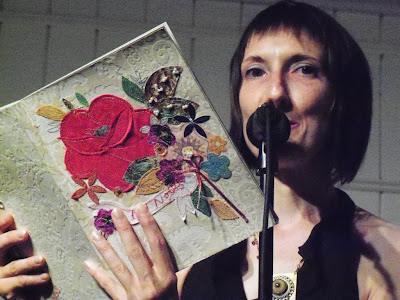 Juliet Cook reads with the TypewriterGirls Poetry Cabaret (downtown Pittsburgh), June 25, 2010
Continued thoughts from yesterday's post on small press reading series: What if a city's lit scene hosted a book blog specifically dedicated to reviewing the books of authors coming into town for upcoming readings?
Let me back up. There's two factors that lead me to this idea:
1.) Yesterday I wrote some do's and don'ts of running (or participating in) a reading. I talked about some things that reading series hosts can do to maximize the positive experience of visiting writers (see #2 on this list). Since we can try our best to cultivate a growing audience for our reading series, but can't ultimately control how many people show up or what event is competing with the reading that particular night, I talked about other things we can do to ensure that the out-of-town author gets to meet other cool writers, or gets publicity or feedback for their new book. I mean, you don't want there to be an unusually low turnout that night and then have a dud audience be the visiting writer's entire memory of both your city and your reading series, right?
2.) I am currently engaged in booking readings and hustling reviews for an author I just published. I'm really excited about the book, but it's the poet's debut collection and no one's heard of him. Every pitch I make is an uphill battle, a competition for someone's time, a bookstore's shelf space, a reading series' slots, and the dwindling column inches dedicated to newspapers' book reviews. After booking the author a reading in Baltimore, I wrote to one colleague in that city to ask for suggestions of local reviewers and book bloggers. He wrote me back with a list of people to try, but gave a familiar warning: Most book reviewers are backed up on such requests.
We've all been reading, of course, about book review sections getting cut or drastically reduced from newspapers and magazines. But even with all the talk about print books turning into e-books, and bookstores large and small having serious struggles, the fact remains that more titles are being published each year. So the demand for book reviews should being rising, not diminishing.
So, I'm proposing the following in my current city of Pittsburgh, and suggesting that other cities consider such a model:
A book blog that would be dedicated to publicizing upcoming readings, especially to reviewing the new books by out-of-town authors slated to read in Pittsburgh soon. So that no one person would be taxed for time, I would be interested in setting up such a blog only after I gathered a critical mass of volunteers. Say, 15 or 20 people whom I thought were solid reviewers, who could be called on to review the next writer, with a rotation insuring that no one had to write a review too often. These reviews would be unpaid, which is too bad. Traditionally, newspapers and magazines have paid for book reviews, and I hate to replace a paid writing gig with an unpaid one. Frankly, I think the amount of unpaid work that goes into the small press is a bit shameful. Sure, we love what we do, but it does take enormous amounts of time and labor, and meanwhile, the rent marches on. If anyone has a suggestion of how to generate a fund to pay reviewers even a token amount, please use the comment section.
Further, the reviews would be positive. The idea would be to generate an audience for writers coming to town, so the reviewers should answer the question (among others): Who would like this book? Who is the intended audience for this book? If the reviewer didn't like the assigned book, s/he would have the option to interview the writer instead, or to not review the book. I wouldn't advocate lying or turning into a sycophant just for the blog, but rather trying to generate an audience and letting the audience decide for themselves what they thought of the writer. (Some writers, of course, give a great show but read very differently on the page.)
When time allowed, interviews could run in addition to reviews. Authors would be asked for JPEGs of their book covers and author photos.
Would local authors be reviewed or interviewed? Maybe. I don't mean to prioritize out-of-town authors over Pittsburgh writers, but I would want to avoid reviewers hyping their friends, over-taxing the volunteer reviewers, constant requests from local writers, and the inevitable scenario of disappointing people often. It might be best to just leave out all those scenarios by confining the blog to reviewing writers coming from outside of Pittsburgh. Or, perhaps a compromise could be running interviews with local writers, with questions asked by other local writers.
I think that interaction and dialogue between writers from different cities is crucial to the health of any one city's literary scene: Scenes that get too provincial, without new blood or fresh air, are in danger of becoming stagnant. A blog like this could add to such a dialogue. Maybe in a perfect scenario, Pittsburgh writers could be reviewed or interviewed by out-of-town writers instead of local-on-local. But that aspect would involve a significant addition of work and organization, so it might be better to start with a more simple formula.
What do you think?
Posted by Karen Lillis at 9:48 AM

I would absolutely volunteer to help out with such a blog. I have a HUGE personal event coming up next week, so I haven't been getting as much done in the lit realm as I would like over the past month, but as you know, I love to do shortish reviews and you and I have a very similar stance on review writing. This is a great idea, Karen.

I would, however, support including local writers' work in the blog here and there. Perhaps on a very scheduled basis and/or solicited work/writers/books only?

Also yes, yes, yes a million times to adding in interviews. I tend to lean toward absurd interviews, but could be convinced to get behind a serious one ;)

"What if it wasn't a blog for a particular city, but was a blog for everywhere, every city. It becomes a gigantic book blog -- with reviews, interviews, and stuff about readings, maybe video of readings -- and it is searchable, by city, so people can find out about readings in particular cities when they want to? // I think it would be a way to spread out the work of it, so to speak, and would allow it to be something flexible enough that people could join the blog and leave the blog easily, and the blog would just keep going. But it would still be a commitment. There would still need to be a person or two running the show, so to speak."

I think there are pros and cons to this, what do you think?

Time permitting I would be happy to help out, Karen.

While Michael's idea sounds really cool, it also sounds like a metric ton of work to set up and maintain. I think it could be smarter to start out with something smaller and see how it goes, what the interest level is, how committed we can be to one city.

I would also be worried about people popping up, joining to promote their reading, and then disappearing completely. From what you wrote, it feels to me like you want this blog to also help build a sense of community/cohesion in addition to helping promote writers/books related to Pittsburgh readings.

If there was a team of bloggers from, say, Chicago (I just know a lot of people from Chicago so it's my example) who wanted to team up and kick this off simultaneously, I would be more for something that.

Again, I think you have a really great idea here and I would love to see it spread, but I am also all for starting off with something we know is managable and working on adding from there.

Have you seen the Reading Local sites? They've had a hard time getting all the locations up and running. They actually wanted to have sites across the country, each locally managed and produced, but it just has not happened. Still, they have an interesting model, kind of like that you're talking about.

Here's a link to the Portland hub, which appears to be the only one up and running right now: http://portland.readinglocal.com

I share that only to give an idea of a similar-ish undertaking, something to glance at, perhaps, in fleshing out your concept.

They also used to have a calendar of all literary events in the area. That was a great feature, but they don't seem to have that element anymore.

Thanks everyone for your comments!

Dana, thanks for pointing out Reading Local! I'll have to take a longer look, but at first glance it does seem to be serving much of what we're talking about here. Like a literary calendar with a blog about the readings.

Pittsburgh has at least two strong resources, one is the new Pittsburgh Literary Calendar, hosted by Sampsonia Way Magazine: http://www.sampsoniaway.org/pittsburghliterarycalendar/

and the other is a directory I made for figuring out all of literary Pittsburgh: who to contact for each reading series, where to book readings, where to shop for books, a list of small press publishers and publications, as well as how to get to Pittsburgh and where to stay, what to see, where to eat, etc. It's a wiki called SMALL PRESS PITTSBURGH:
http://smallpresspittsburgh.wikispaces.com/

Karen, I think this is a great idea. I think you could get a lot of help with review writing from local universities. I know people in my MFA program are always looking for writing opportunities. I also think it is smart to focus on out-of-town writers. Pittsburgh is very supportive and it is often preaching to the choir for those of us that are very involved. By shining a light on Pittsburgh through readers from other cities, perhaps more people will want to come here and be involved, more reading series will have a firm audience, etc.

I would volunteer to write, but alas, I'm moving out of Pittsburgh and feel it would not fit with your goals.

Yes, here you can find the mission statement for Reading Local: http://readinglocal.com/

I think we should consider this as an option, because I like that it's networked with other cities. That alone would give Pittsburgh's lit scene more visibility.

Laura, thanks for your thoughts! And I didn't know you were leaving town! :( I'll email you.

I agree with tagging on to ReadingLocal - it would be great to have 500 folks registered to create the space. I like that it's linked with other cities, too. I'd be happy to contribute in any way. I do think the wall between what is "local" and what is not needs to be torn down. Good literature has nothing to do with geography.