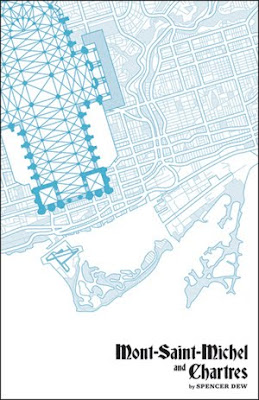 Today's next round of small press picks come from Spencer Dew. I've had the pleasure of meeting Spencer, a prolific fiction writer and a whip-smart critic, twice when he's come to Pittsburgh to see a personal friend, and am grateful that he bothered to reach out to a few of us in the lit community while he was here. He's the author of a dark, perceptive collection of short stories, Songs of Insurgency (Vagabond Press, 2008), and a deservedly-praised book of criticism, Learning for Revolution: The Work of Kathy Acker (San Diego State University Press, 2011). Chicago's Another New Calligraphy produced a gorgeous edition of his short narrative in 2010, titled Mont-Saint-Michel and Chartres; his first novel, Maintain, is forthcoming from Ampersand Books in just a few months (April 2012).

I realized recently that it's nuts that I've never arranged a reading for Spencer during his travels to Pittsburgh and plan to rectify that the next time he announces a visit. Thinking out loud, I would probably try to get him into the monthly TNY Presents series, or a reading at the soon-to-open downtown location of Awesome Books, or maybe an event at the dive bar Belvedere's. For a local reader, I might pair him up with short story author Damian Dressick, or budding experimentalist Tait McKenzie Johnson, or former Cyberpunk Apocalypse resident, Gunner.

*****
1. The Body is a Little Guilded Cage: A Story in Letters and Fragments, Kristina Marie Darling (Gold Wake Press)

“The cathedral heaves,” and a needle reads a groove, making music, melancholy, in this haunting treasure of fragments, an entrancing Cornell box crafted from bits of HD’s letters. Freud leaves his traces here, too, little statuettes and canopic jars, in a book that manages to mimic the structure of dreams.

There a pun, in the original Danish, between the poet’s first name and “Marken” or field, and here, lonely against the white space of the page, we have assorted musings about that field, identityy as a chain of idiosyncrasies, desires. As a fresh and addictive template for autobiography, it will realign how you think about your "self."

Startlingly motley, every page of this collection of poems jars the reader with unexpected juxtapositions and shimmering turns of the colloquial. Reading this book is as close as most of us will get to an afternoon playing Frogger with actual timber trucks, actual pipe bombs, and pudding after, on a squishy couch that sighs as you sink back into it.

Poverty-struck poet lands a cubicle job in the pornography industry, but inexhaustible good humor and a resolute belief in poetry's ability to offer at least a temporary anecdote to the oppressions of the status quo makes this book like one of those little hypos of adrenaline folks carry in case of emergency.

Recommended by Spencer Dew
Author of Mont Saint Michel and Chartres, and the forthcoming novel Maintain
www.spencerdew.com
Posted by Karen Lillis at 1:49 PM