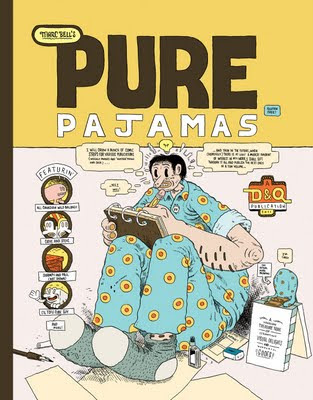 Our last indie publishing recommendations for 2011 come from Marc Bell, who came to Pittsburgh in September when his Pure Pajamas (Drawn & Quarterly) tour joined up with the Big Questions tour of illustrator Anders Nilsen. Based in Ontario, Marc is both a cartoonist and a fine artist whose drawings have been compared to R. Crumb, Kaz, and Philip Guston. In the '90s he rose to underground fame with his self-published mini-comics (aka comic zines). Other readers might know him from the anthology Kramers Ergot or his own retrospective book, Hot Potatoe (Drawn & Quarterly, 2009).

Copacetic Comics hosted Marc & Anders' Pittsburgh event, as I mentioned on Day 8 of the Best of Small Press 2011. I've already crowed about (more-than-comics) indie bookstore Copacetic a few times on this blog, but I don't think I've mentioned PIX, the new Pittsburgh Indy Comics Expo that Copacetic owner, Bill Boichel launched in 2010. From the start, PIX drew an impressive array of small publishers and self-publishers from Pittsburgh, Cleveland, Chicago, DC, Brooklyn, Philadelphia, Columbus, Vermont, and numerous other spots in the Northeast and Midwest. In 2011, PIX coincided with SPF, Pittsburgh's literary small press fair.
Thanks again to Marc Bell for offering the final recommendations for Best of the Small Press 2011. Don't miss this long interview with him in The Comics Journal. 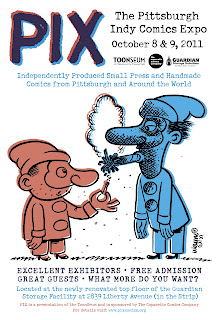 thanks for this great series!