Today’s recommender is author David Hoenigman. I had the pleasure of reading with Dave when he came to visit his folks in Cleveland (on a visit from Japan, his current home) in 2007. Dave’s novel was due to come out on Six Gallery Press at the time, and he graciously offered to set up a Six Gallery Press reading at Mac’s Backs in Cleveland Heights. He invited about seven of us from Pittsburgh, and we caravanned West in a few cars for a very cool reading. It was my first road trip since I'd moved to Pittsburgh, and it didn't disappoint: Cleveland Heights has an awesome vibe, Mac’s Backs is one of the great indie bookstores of America, and the audience was alive and attentive. Dave’s excerpt from Burn Your Belongings was one of the most memorable performances of the night: a super-charged reading of his dense, electric prose. His novel has since been reprinted on Jaded Ibis Press. 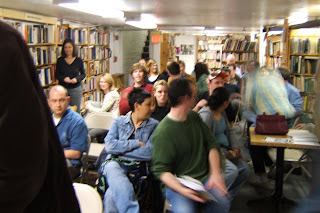