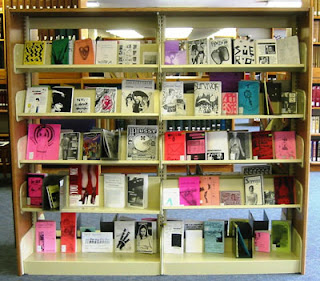 Today’s small press picks come from two awe-inspiring librarians. Jenna Freedman is the first small press librarian I ever met. She came to Pittsburgh in 2007 with the greatest public librarian (and small press advocate) you’ve never heard of, Sandy Berman, for a Progressive Library Skillshare, which I was lucky enough to attend during my first semester of library school. Jenna has built a zine collection at the library at Barnard College and gives enthusiastic and infectious talks about how to start a zine library. She’s also involved with Radical Reference, a group of progressive librarians who began in 2004 as information support for activists and journalists around the Republican Convention in Manhattan. Her recommendations today come in the form of three reviews she's written over the last year. Renée Alberts is a librarian at the main Carnegie Library of Pittsburgh where she runs the Sunday Poetry and Reading Series. As both a librarian and a poet, she kicks ass and doesn’t take names. I’ve had the good fortune to see her read at many Pittsburgh venues, and her performances continue to give me goosebumps. Renée was kind enough to add mini-reviews to her small press picks.

*****
1. Inferno: A Poet's Novel, Eileen Myles (OR Books, 2010)
Myles' wickedly honest delivery of her misadvenures as a young queer poet in New York will resonate with any writer who has ever weathered the awkward process of establishing her voice in a community. Her honesty reveals the pangs and thrills of self discovery in resonating passages that are by turns hilarious, inspiring and poignant.


2. Barefoot and Listening, Margaret Bashaar (Tilt Press, 2009)
Bashaar crafts a world of feminine strength and ethereal musing. Her poems are an alchemical blend of the mythological with the natural and ordinary worlds that lends your vision a deeper hue when you look away from the page.


2. afterpastures, Claire Hero (Caketrain, 2008)
Hero's vocabulary evokes a strange, feral narrator welling with desire. Brief lines crackle with surprising choices. Her language enchants you even as her imagery prowls towards the eerie imagery of gristle and cracking bones. The poems approach the dark mystery of fairy tales as they might sound from a character long isolated in a forest, dreaming of the person they so intimately address.

Recommended by
Renée Alberts, author of the poetry book No Water (Speed and Briscoe Press, 2009) and editor of the anthology Natural Language: Carnegie Library of Pittsburgh Sunday Poetry and Reading Series Anthology (Carnegie Library of Pittsburgh, 2010). Renée listens to rivers and shortwave and transcribes her discoveries at www.animalprayer.com.

I'll be blogging more small press picks now through the end of the year. Email me at eyescorpion@gmail.com if you are involved with the small press and wish to contribute.
Posted by Karen Lillis at 2:08 PM