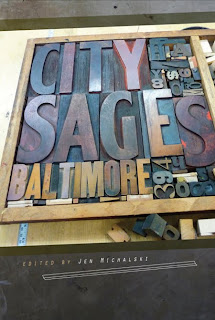 Today’s small press recommendations come from Baltimore. I met Charm City author Jen Michalski when she came to Pittsburgh in August 2008 to read at The New Yinzer Presents series. Jen’s an impressive fiction writer, a small press mover and shaker, and a total mensch. Soon after I met her I read her stunning story collection, Close Encounters, and not long after that, she and Michael Kimball asked me to read at the 510 Reading Series they host in Baltimore.
If you haven't checked into the Baltimore literary scene yet, you should. They've got Atomic Books; The Book Thing; Eight Stone Press and Smile, Hon', You're in Baltimore; Publishing Genius; Pat King and Last Rites Baltimore; Narrow House Press; and the wonderful, aforementioned, fiction-only 510 Readings. I can't say enough about the 510: The neighborhood is charming, the venue, Minas Gallery, is both hip and heartwarming, the hosts are gracious, and the literary audience is all a writer could ask for. And afterwards, they wine and dine you at the nearby, cavernous neighborhood pub called Frazier's.
It was at Frazier's that night that I almost met Adam Robinson. He was there, and I was there, and we exchanged words and probably a handshake and apparently a pamphlet. But to be honest, my entire family had come to see me read after none of them had ever come to see me read, and I was totally sober but deeply out of it that night. I wish I had met Adam Robinson, because everytime I read one of his poems, I think it blows away most of the poems I've read before. I think Adam Robinson might be hilarious.
*****
1. Rattlesnakes and the Moon, Darlin' Neal (Press 53, 2010)
2. Further Adventures in the Restless Universe, Dawn Raffel (Dzanc Books, 2010)
3. Stories II, Scott McClanahan (Six Gallery Press, 2010)

Recommended by
Adam Robinson, author of Adam Robison and Other Poems (Narrow House)
http://www.adamrobisonisabookofpoems.com/
*****
Please stay tuned for more book recommendations for your holiday gift lists. And for God's sake, support your local indie bookstore.
Posted by Karen Lillis at 11:21 AM