Today’s book picks come from two of the hardest-working people in Pittsburgh’s small press scene. Fiction author Sherrie Flick is the co-founder (with poet Nancy Krygowski) of an amazing reading series that has brought emerging writers to enchant Pittsburgh audiences once a month for the last ten years. The Gist Street Readings have no equal, and the audience that Sherrie and Nancy have cultivated is a big part of that. Held in an artist’s studio building, augmented with a delicious pot luck dinner, the readings regularly turn people away when they reach capacity: This means 85 people in the winter, and 120 people in the summer--audiences so hungry to listen to writers they often haven’t heard of that they arrive way-early (I always go an hour in advance) and clamor inside. Once a year, the Gist Street Readings* showcase one small press--hosting several readers instead of just two. As if this weren’t enough, Sherrie is also the author of award-winning micro-fiction and a beautiful novel, a teacher of writing, and a writer of articles and book reviews.

Poet Adam Atkinson is one of the driving forces behind Open Thread, a Pittsburgh small press outfit that publishes books, runs a chapbook contest, co-hosts a reading series, and in 2009 started an annual Small Press Festival in Pittsburgh. Adam is also co-founder of a brand new small press, Oh No Books. I’ve had the pleasure of reading with Adam, whose poems are whip-smart and funny.

For the first Small Press Festival in 2009, Adam and Sherrie joined forces and brought IsReads Issue Number 5 to Pittsburgh. IsReads is the outdoor journal founded by Baltimore’s Publishing Genius and co-edited by Nashville’s Keyhole Magazine. Adam and Sherrie took the matter to City Council in Pittsburgh and July 21, 2009 was declared “The Journal Outdoors Day” by the City of Pittsburgh. 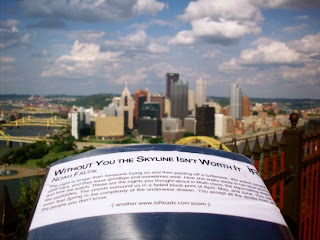 *The Gist Street Readings are actually set to end at the close of 2010. Perhaps I will ask Sherrie and Nancy to do an interview. I would love to know what they learned about running such a great reading series for 10 years. When I was moving to Pittsburgh, a few poets told me, "Well, The Gist Street Readings are there, but there's nothing else." If this were ever true, this is no longer true, but good for Gist Street for starting to put Pittsburgh on the map of literary America. So, what can the small press do for your city?

Stay tuned for more small press picks.
Posted by Karen Lillis at 11:53 AM